A cynic might say that the defining characteristic of jazz-rock fusion is that it pleases neither the jazz fan nor the rock aficionado. But after a few years playing together in Marbin, guitarist Dani Rabin and saxophonist Danny Markovitch found that they had become a fusion band. And the group’s success puts the lie to the idea that fusion can’t be both adventurous and accessible. In support of its sixth and latest release, Goatman and the House of the Dead, Marbin plays the Asheville Music Hall June 30.

The Chicago-based band came together by chance. Markovitch and Rabin met in 2007 in Israel; Rabin had recently graduated from Berklee College of Music in Boston, and Markovitch had just finished Israeli military service. The two had been hired for a studio session with a drummer. “But the guy got food poisoning,” and didn’t show up, Rabin recalls. With the studio already booked, Rabin and Markovitch decided to play and record without the drummer. The music they made together was mostly “free improvisation,” Rabin says. The named the new project Marbin, based on a combination of their surnames. 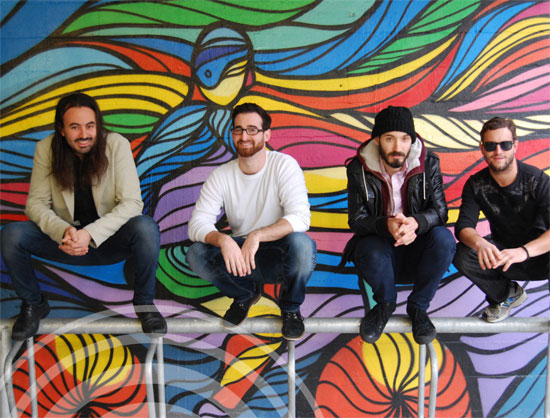 Shortly after following some musical opportunities that took them to Chicago, the earliest lineup of the group fell apart. Now down to a duo, Rabin says he and Markovitch “started doing our own thing; we kept writing together.” Their self-titled debut album was released in 2009. Rabin describes that early effort as “lots of loops and texture, but not really fusion.”

The pair had some trouble adjusting to Chicago weather. “It was so cold, and we were sick of going out in the winter,” Rabin says. “So we decided we were going to throw shows at home, and have the audience come to us.” At one of those house concerts, a friend of a friend showed up. His name was Leonardo Pavkovic, owner of jazz/progressive record label MoonJune, and then manager of legendary fusion guitarist Allan Holdsworth. Rabin recalls that Pavkovic loved their music, and wanted to release Marbin’s next album.

But there was a catch. “He told us that in the States, you don’t have a chance if you don’t play with drums,” Rabin says with a laugh. “Because people need to have this music banged into their heads.” They took Pavkovic’s advice, adding a drummer and releasing Breaking the Cycle in 2011. In support of that release, Marbin started a full-time touring schedule. “300 days a year,” Rabin says. “And we’re still doing that.”

Along the way, the band discovered that Pavkovic’s instincts about adding a drummer were spot-on. “We play at such an intensity and a volume that people have the choice of staying or running away,” says Rabin. “You can’t have people there talking. You have to put them in a fight-or-flight mode.”

By the time Marbin released its third album, 2013’s Last Chapter of Dreaming, the band had become a four-piece, and the music had developed a distinctly jazz-rock fusion character. Rabin says that his electric guitar tone is off-putting to jazz purists. “It’s very saturated, and that comes from the rock side of things,” he says. Rabin says that his guitar style and tone doesn’t please jazz fans who love Miles Davis. “They didn’t even like it” when Davis played with guitarists like John McLaughlin, Rabin says.

Besides, Rabin says, “I don’t think there is such a thing as a jazz audience anymore.” He characterizes Marbin’s fan base as an eclectic mix. “We have bikers, we have hippies. We have some jazz fusion people, prog people … really, a collection of everybody,” he says.

Rabin is nonplussed when asked how his and Markovitch’s Israeli identity manifests itself in Marbin’s music. “It might be a little Jew-y?” he offers with a chuckle. “There’s probably a little bit more European stuff in there. We’re Israeli, but in all fairness my family was in Israel for [only] 50 years,” he points out. “Before that, we took a 2000 year break in Europe.” He says that he can’t control the outcome when he sits down to write a song. “There’s only one way to write music,” Rabin says. “You’ve got to ask yourself, ‘What is good?’ and then see what’s in there.”