Album Review: Nolan McKelvey & Dave Desmelik – ‘Where it Takes Us’ 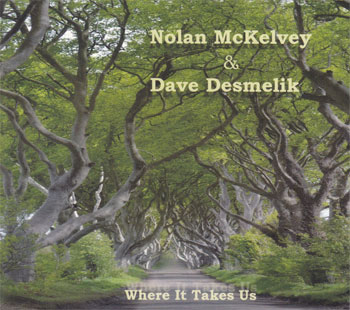 In an era when recordings artists routinely go years between album releases, Brevard singer-songwriter Dave Desmelik is an outlier. Since Move On, his 1999 solo debut, Desmelik has released no less than 11 records under his own name; his most recent was 2016’s Lifeboat.

But Desmelik’s recording career was already well under way when he made Move On; around that time he was also in a Flagstaff, Arizona-based band called Onus B. Johnson. That outfit released a pair of albums in 1998 and 2000. One of Desmelik’s bandmates in that project was fellow guitarist Nolan McKelvey. Though McKelvey relocated to Boston (and then back to Arizona), the two longtime friends would stay in touch over the years. And now they’ve teamed up once again to make Where it Takes Us.

Though both men tend to operate primarily in the Americana and singer-songwriter genres, Where it Takes Us has an easygoing country-rock flavor that bridges the gap between styles. The duo never rocks as hard as, say, Old 97s, but there’s an electric sensibility to many of the songs on Where it Takes Us that enlivens the material.

The musical touchstones of the ten-track disc include Gram Parsons’ rooted-in-classic-country aesthetic, Neil Young’ scruffy, distorted take on an acoustic-based form, and perhaps even Eagles (in the record’s largely accessible and radio-friendly sound). Desmleik and McKelvey trade lead vocal duties across the album, and while their vocal styles are quite different from one another, the sturdy songwriting is the glue that holds the project together.

The themes explored on Where it Takes Us are ones that ring true on both a personal and universal level, and the warm, intimate production displays those songs in the best possible light. The duo applies a light touch on “Letting Go of the Weight,” with an arrangement that showcases only vocal, acoustic guitar (well, okay: an occasional splash of electric) and understated organ. But such a song needs nothing more; it’s a quiet, contemplative tune that deserves focus on its lyric.

The exceedingly brief instrumental “The Disconnect” shows what Desmelik and McKelvey can do with only the barest of instrumentation; in under two minutes it displays a dramatic flourish. Those who prefer the Appalachian folk side of the guitarists’ work will enjoy “The Bond,” an ever-so-slightly-modern take on old time styles. The brief mandolin break on “We Made Time” is tasty as well. And “Solstice” shows that Desmelik and McKelvey can easily slip from one style into another; though guitar-based, the instrumental has a feel redolent of George Winston’s atmospheric piano solos.

Where it Takes Us closes with a deeply textured piece, “All Shall Be Well.” The song’s creaky lead vocal suggests Neil Young’s haunted early 1970s work in both arrangement and lyrics; everything about the tune suggests that unknowable pain lies beneath its oblique lyric and spare piano accompaniment.

Where it Takes Us is a varied collection that plays to the strengths of the artists involved.