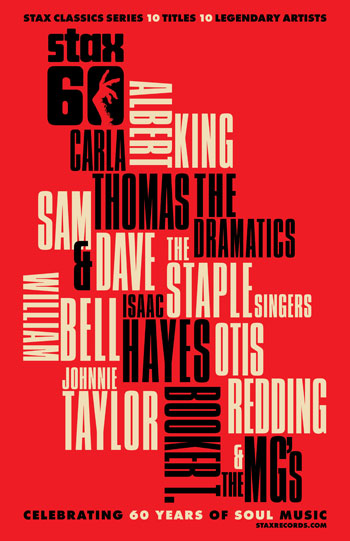 The venerable and legendary Stax Records was started 60 years ago in Memphis, Tennessee. Originally doing business as Satellite Records, the label founded by Jim Stewart and Estelle Axton (and later hemled by Al Bell) would go on to release a catalog of staggering quality before falling victim to a host of problems that would end its existence in the mid 1970s. (Stax would eventually continue as a reissue label.) Those interested in learning more about Stax are enthusiastically directed to Rob Bowman’s excellent and richly detailed Soulsville, U.S.A.: The Story of Stax Records, published in 1997.

Today Concord Music owns the rights to administer the Stax Catalog, and has done a good job of reintroducing long-deleted titles to release. To celebrate the 60th anniversary of Stax, Concord has compiled best-of from several of the label’s artists. I have four of those titles – all released May 19 – on my desk: all are called Stax Classics, and there’s one each from William Bell, the Dramatics, the Staple Singers and Johnnie Taylor. Each Stax Classics entry features a dozen tracks by the highlighted artist, plus a short yet informative liner note essay and a reasonable amount of discographical information. These aren’t really designed for the serious enthusiast; instead each serves as a tidy sampler/introduction to the Stax-era work of the artist.

William Bell’s Stax Classics volume features his best-loved tracks, including “Private Number,” his romantic duet with Judy Clay. The other 11 tunes are pretty great, too. The Dramatics are represented best by “In the Rain” and “Whatcha See is Whatcha Get” (both on Stax Classics), but other lesser-known cuts like “Get Up and Get Down” and “The Devil is Dope” are breathtaking in their arrangement and execution.

The riches found in the versatile Staple Singers’ wonderful catalog likely made paring Stax Classics down to a dozen tracks a difficult task. The song’s you’d expect to find are indeed here: “Respect yourself,” “I’ll Take You There,” and so on. An excellent and little-heard later-period cut, “City in the Sky” is included as well. Johnnie Taylor’s entry in the series includes his unbelievably funky (if naughty) “Who’s Making Love” as well as the incendiary “Somebody’s Sleeping in My Bed”: and ten others. All four are excellent, but on sheer chutzpah I’d give a minuscule edge to the Johnnie Taylor set.