Mike Mills: R.E.M. and Beyond 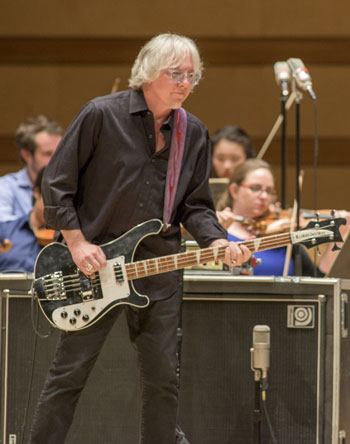 I grew up just outside of Atlanta, Georgia, so when R.E.M. got together in the nearby college town of Athens and started making noises in 1980, my friends and I thought of them as a local group. We followed with interest their rise in popularity; I recall an episode a few months before the release of Fables of the Reconstruction, R.E.M.’s third album (and the only one to have been recorded in the UK); the band had just received an advance from their label and had purchased a brand-new live sound system. Wanting to work the bugs out in front of a sympathetic audience, they kicked off the “Pre-Construction” tour with a free concert at Legion Field. On April 22, 1985, my friends and I made an hour-long road trip east to Athens, and watched as vocalist Michael Stipe spent the entire evening with his back to the audience. Still, a great show.

Mike Mills and I first met about a year earlier, at Atlanta’s now-legendary 688 Club where were both had come to see Alex Chilton play. We chatted briefly, but that was the extent of our direct communication until very recently.

I did keep up with R.E.M., though. In spring 1991 they released Out of Time; that summer I was living and working in London, and was more than a bit amused to find that wherever I went, I heard “Losing My Religion” and other tracks from the hit album. Here I was on my first excursion off the North American continent, and all I heard was a band from back home.

Mike Mills is, of course, best-known as the bassist in R.E.M. A founding member, Mills remained with the band until its amicable dissolution 30-plus years later. In addition to playing bass, Mills provided harmony vocals (and the occasional lead vocal), played keyboards, and – with guitarist Peter Buck – was a primary songwriter for the band. Though he describes himself as “semi-retired,” since R.E.M.’s breakup, Mills has continued to busy himself with musical activity: he’s a member of indie-rock supergroup The Baseball Project, he’s been deeply involved in the “Big Star’s 3rd” series of concerts, and in late 2016 he released Concerto for Violin, Rock Band, and String Orchestra, a collaboration with lifelong friend and virtuoso violinist Robert McDuffie.

Mills was born and raised in Macon, Georgia, 90 miles south of Athens. “Piano was my first instrument,” he says. “I’d first taken lessons when I was 14, and then about a year later I started to teach myself bass.” By age 16 he was in a band with future R.E.M. drummer Bill Berry. “Bill and I were really solid,” Mills says. He played a Fender Jazz that belonged to his high school.

His mid-’70s bass setup was modeled after that of a local hero, Allman Brothers Band bassist Berry Oakley. “I had two Fender Dual Showman reverb amps: one cabinet with two 12’s and one cabinet with four 10’s.” Though Mills is most often associated with the Rickenbacker 4001, he went through a series of basses before finding the Rick. “I played a beat-up Hofner for awhile,” he says. “Then I played an Ampeg Dan Armstrong clear acrylic bass. I played a Fender Musicmaster for awhile, and then I found that ’71 Rick.”

The 4001 would remain Mills’ instrument of choice “until one of the horseshoe pickups went out. We couldn’t find another one.” He got a factory-replacement pickup but wasn’t happy with it. Mills then went through another series of basses – Ibanez, Guild – and then he tried out a 1970 Fender Precision he calls “Old Yeller” (the bass was originally yellow, explains Mills).

“I had sort of resisted the P bass,” he says, “because everybody played them. But then I found out why. It was because they’re the best, especially for live shows. They’re just so durable, and they don’t go out of tune. They sound fantastic, and they feel good to play.” Eventually, though, Mills’ bass tech located a working vintage horseshoe pickup, and the 4001 was returned to active duty. It’s actually a 4001S with Rick-O-Sound stereo output. “But I’ve never used it,” laughs Mills. “We tried it, but it was more trouble than the sound was worth.”

Mills has made a point of avoiding bass guitars with more than four strings. “Can’t stand them,” he laughs, admitting that five strings “just confuses me.” His bass strings of choice are D’Addario nickel wounds, .045 – .100 gauge; “I’m a round-wound guy,” he says. “I like a lot of mid-range; a lot more than most bass players. And I like a little buzz in there.”

More often than not, Mills plays bass with a pick. “But it depends on the song,” he says. “Not that I’m a funky bass player anyway,” he laughs, “but sometimes there’s a rhythmic thing you can get with your fingers that you can’t get with a pick.”

In the studio with R.E.M. – working over the years with producers and engineers including Mitch Easter, Don Dixon, Joe Boyd, Scott Litt and others – Mills generally preferred a clean and simple approach to recording his bass. “I’ve never really been an effects guy,” he says. “I just run it through the amp and then record one direct, and then blend the two.” He says that the sound coming out of his amp – often a Mesa/Boogie or an Ampeg SVT – “was usually so good that I didn’t mind if [the producer] wanted to blend in a little bit of the direct signal.”

Even live, Mills has mostly avoided pedals or other effects for his bass rig. “The only time I ever really used a pedal was on the [1995] Monster tour,” he says. “I had a Big Muff distortion pedal that I would use on two or three songs.”

One of the most distinctive qualities of the R.E.M. sound was the jangling guitar of Peter Buck. “Peter taught himself to play,” says Mills. “He always approached [guitar] with that arpeggiated style; that’s one thing that set up apart. Peter is my favorite guitar player in rock ‘n’ roll.”

Playing bass behind that style – and along with what Mills calls Berry’s “orchestral” drumming style – meant that Mills often played in an active, melodic fashion with R.E.M. He names Berry Oakley as one major influence upon his style. “I hate to be so obvious, but Paul McCartney was a big influence, too,” he says.

But Mills admits to another influence, one perhaps unexpected for such a straight-ahead player. “I always enjoyed Chris Squire’s playing,” Mills says. “I was not a huge Yes fan, but I liked the way he played it melodically, like a guitar, and kind of up-front.”

R.E.M. studiously stayed away from trendy sonic textures and production flourishes on their albums; their success at that is a big part of why their songs still sound fresh 30-plus years after they were recorded. “We told Mitch Easter and Don Dixon from the very beginning that we did not want to sound ‘eighties,’” Mills says. In fact, during the sessions for the group’s 1983 debut album Murmur, he recalls that “the head of the record company called Don and Mitch and told them to ‘eighties it up’ a little bit. Peter Buck and I heard that and said, ‘No way!’”

R.E.M. disbanded in September 2011; it was “the right thing at the right time,” Mills says. In his post-R.E.M. years, Mills has been seen onstage most often playing his trusty black Rickenbacker 4001; he’s used it on tours with The Baseball Project, and on his recent tour fronting the hybrid rock band/orchestra. For the latter, he’s part of a four-piece rock ensemble out in front of a 15-piece string section.

Regarding his next move, Mills is circumspect. “I have no idea what’s in the future,” he says, allowing that some things are likely. “There might be a few more Big Star 3rd shows down the line. Hopefully the Baseball Project will do another record soon, and I think there will be some more Concerto shows with various symphonies around the world.”

Most recently, Mills has been doing interviews in connection with 25th anniversary expanded reissue of Out of Time. That got him thinking about why the band was as successful as it was. “What set R.E.M. off and apart was that we didn’t want to do things in a traditional way,” he says. “And we sort of had the zeitgeist.”