Super Doppler Gets Called Up to the Majors

As Major and the Monbacks*, Super Doppler signed with tastemaking independent record label Yep Roc* just a few months ago, but the Norfolk, Virginia band isn’t exactly a new act. “There was a long and winding road to Yep Roc,” says multi-instrumentalist Neil Friedman. “We’ve been playing together as some form of this group for almost ten years now.”

The band is organized around two pairs of brothers – Friedman and his twin Cole on bass, and Michael Adkins and Bryan Adkins on keys/guitar and drums, respectively – plus a percussionist (Tyler West) and another multi-instrumentalist, Harry Slater. Slater wrote about half of the songs on Moonlight Anthems, the band’s Yep Roc debut. 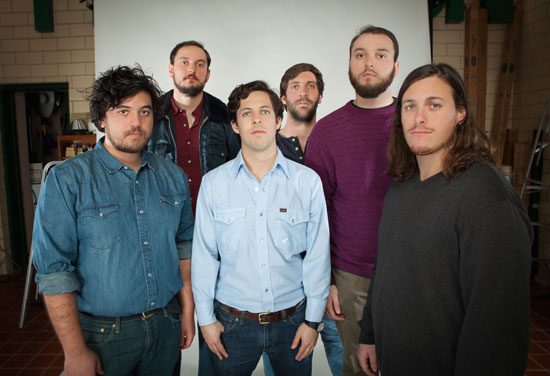 Fairly or not, bands with brothers have developed a reputation for infighting: the on- and offstage dust-ups among the Davies brothers (the Kinks), the Gallaghers (Oasis) and the Everly Brothers are the stuff of rock ‘n’ roll legend. But so far, Super Doppler has avoided that kind of internal strife. Playing in a band with one’s brother “does make bickering easier and more commonplace,” Friedman admits, “but it’s never going to boil over into something that could break up the band.” He pauses and adds with a smile, “I’ll cross my fingers and knock on wood when I say that.”

Super Doppler didn’t wait for a record deal to make its second full length (the band self-released Major and the Monbacks in 2015). Friedman says that the band recorded Moonlight Anthems “before we had any label support at all. We obviously wanted a record label, so we recorded [the album] and shopped it around.”

The group was aided in its creative efforts by producer-arranger Matthew E. White (Natalie Prass, Foxygen), who worked behind the recording console on Moonlight Anthems. “It began as, ‘We should get Matthew to produce our album, ha ha’ – kind of joking, really,” recalls Friedman, and then they actually connected with him.

“Matthew is world-renowned now,” says Friedman, “but we knew his name just from playing around Virginia; he’s based in Richmond, and we play there all the time.” The band didn’t even have to provide demo recordings to win over the producer. “He just asked us, ‘What are you trying to do? What do you want it to sound like?’”

Even though the band maintains a regular live performance schedule, the songs on Moonlight Anthems weren’t written on the road. “I can’t write songs when I’m in and out of a van all day and every other day,” laughs Friedman. Several of the new record’s songs have been in the band’s set list for a while. “A couple of them – like ‘The Clap’ – we had played live before recording,” Friedman says. Other songs were new: “we just rehearsed them, arranged them for the band and brought them straight into the studio. ‘Holidays’ is like that.”

Super Doppler isn’t a jam band – there’s a conciseness to the band’s songwriting and arrangements that owes more to 1960s rock and pop rock influences – but the musicians do sometimes stretch out live onstage. While the self-released debut does have some longer musical passages – “I listened again a few weeks ago and was surprised at all the instrumental breaks we had,” says Friedman – Moonlight Anthems represents a more streamlined approach. “We focused more on the songs,” he says.

Some of the band members’ influences arose from deep immersion into music when they were young. The Friedmans’ grandfather owned Frankie’s Birdland, a popular record store in one of Norfolk’s African American neighborhoods. “I never had a lack of new things to listen to – or [musical] opinions pushed on me,” says Friedman with a laugh. “One of my first summer jobs was working at the record store. I got paid two CD’s a day.”

Several of the songs on the band’s latest album incorporate a soulful horn section that features as many as five auxiliary players. But on the band’s current tour, the horn players stay home. “The songs hold up live without them,” Friedman says. “The first album pretty much just caught us in a room playing; the psychedelia of Moonlight Anthems is harder to reproduce onstage. But we bring it.”

* Days after this story was filed for print publication in Flagpole, Major and the Monbacks changed their name – apparently without issuing a formal press release – to Super Doppler. They also parted ways with Yep Roc prior to the album’s release (which Yep Roc then cancelled). I’ve updated the text where applicable, but the album in hand still reads “Major and the Monbacks.”