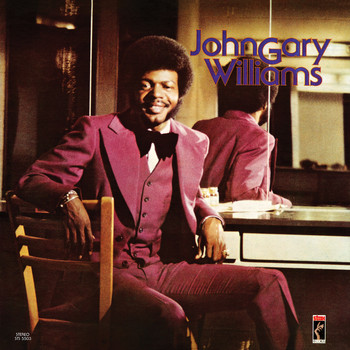 Memphis-based Stax Records had a long, impressive and tumultuous history. The label that was home to legendary artists like Booker T & the MGs, Otis Redding and Isaac Hayes produced a staggering amount of “southern soul” in its heyday. But bad luck and a host of other problems (best chronicled in Rob Bowman’s exhaustive history Soulsville U.S.A. and/or on the DVD Respect Yourself: The Stax Records Story) led to the label’s demise in the mid 1970s.

As Stax approached its end, the distribution problems that had long plagued it became even more pronounced. That meant that however good the product might have been, much of it never made it to record store shelves. A number of good albums were thus lost in the process. And once Stax went under, many titles became unavailable in any form for many years.

In 1972, a Stax artist named John Gary Williams (formerly of the Mad Lads) released a single, “My Sweet Lord” b/w “In Love With You.” The a-side, of course, was a cover of George Harrison’s 1970 smash hit single. Williams’ high vocal and a funky, wah-wah guitar-led arrangement arguably placed the song closer to its gospel/devotional character than Harrison’s original. The single didn’t chart, but it impressed the label enough to earn William the right to cut a full album.

Released in 1973, the self-titled John Gary Williams features eight songs, half of which are Williams originals. And unlike the gritty, simply-arranged single, the tunes on John Gary Williams are lushly orchestrated, putting them closer to Isaac Hayes’ work of the period. “I See Hope” is more or less a gospel lyric wedded to a soul melody (but then, that describes quite a lot of what we call soul music). A kinetic bass line and some soaring brass and string parts give the song a streetwise, chugging feel. That the melody rarely extends beyond a one-chord vamp detracts from its charms not a bit.

“I’m So Glad Fools Can Call in Love” has a shimmering, Philly soul feel. The crystalline arrangement is somehow understated and opulent at once, with Williams’ lilting croon at the center of everything. A reading of Bobby Russell’s “Honey” (a 1968 hit for Bobby Goldsboro) might seem like a bad idea, but in Williams’ capable hands, the song displays more of its romantic nature, less of its too-sweet-by-half sentiment. Taking a page from the Isaac Hayes playbook, William slows the tune down and extends it to nearly seven minutes.

Williams changes things up quickly after “Honey.” “Loving You (It Ain’t Easy)” sounds like a hit that never was. In a just world, the song’s catchy melody, an appealing lyric and a slinky, danceable midtempo vibe should have all converged into a smash. A brief but tasty lead guitar solo (courtesy Michael Toles, Bobby Manuel or Michael Cooper) is a treat, too.

“Ask the Lonely” is more Hayes-styled romanticism, with a sax line by a member of the Memphis Horn. The melody isn’t quite on a par with some of the other tunes on John Gary Williams, but it’s a solid enough slow-jam love song.

“How Could I Let you Get Away” employs the oft-used spoken intro strategy, leading into a lovely harmony vocal (likely Williams overdubbed, with able backing from session singers). The Memphis Symphony Orchestra’s string work is subtle yet critical to the song’s appeal.

“Open Your Heart (And Let Love Come In)” features perhaps the most musically ambitious arrangement on the album. Unfortunately, the tune itself doesn’t stand up to the treatment; even the backing vocal parts feel undeveloped. Still, it’s not a total loss; Williams’ lead vocal is lovely, and Earl Thomas’ bass guitar work – mixed out front – is superb.

The brief John Gary Williams concludes with its best-known tune, “The Whole Damn World is Going Crazy.” A wonderful string arrangement and some nonworking lyrics that span the gape between soul and gospel. (Speaking of which, Williams would release one more single, on Stax’s gospel imprint Truth, in 1975. “Come What May” b/w “Just Ain’t No Love (Without You Here)” would have fit nicely on the album.)

John Gary Williams was out of print for many years; a 1997 CD reissue was released in Japan only. In 2010 a small label (Beat Goes Public) secured the rights to reissue the album on CD. But the 2017 reissue – on vinyl, and on the reactivated Stax imprint – restores the album to where it belongs. Seemingly – and not at all surprisingly – the original sleeve arts seems to have gone missing, band the reissue sleeve is based on a cleaned-up copy of an original LP. The heavy 180-gram vinyl and new liner notes from John Hubbell are just icing on the cake.

Today Williams remains active musically, having reactivated the Mad Lads. He was the subject of a planned 2013 documentary film, I See Hope. Sadly, the Kickstarter funding project for the film came nowhere near its goal, and at present the project’s future is uncertain. Let’s hope that the reissue of John Gary Williams will spur renewed interest in this overlooked sweet soul singer.