Detroit-based vocalist Jessica Hernandez and her band the Deltas earned their first big break when chosen to appear as a musical guest on a November 2014 episode of Late Show with David Letterman, just months before the show ended production. With musical muscle and assured swagger that recalls early Pretenders, the group’s performance of “Sorry I Stole Your Man” visibly impressed the typically unflappable Letterman.

Jessica Hernandez and the Deltas’ debut album Secret Evil had been released a few months earlier in August; the band subsequently toured in support of the release. Though two non-album singles would be released in 2015, more than two years would pass before word of a follow-up album. But clearly the group was busy: the result of their efforts is not one but two albums, Telephone and Teléfono, both due for release June 23. 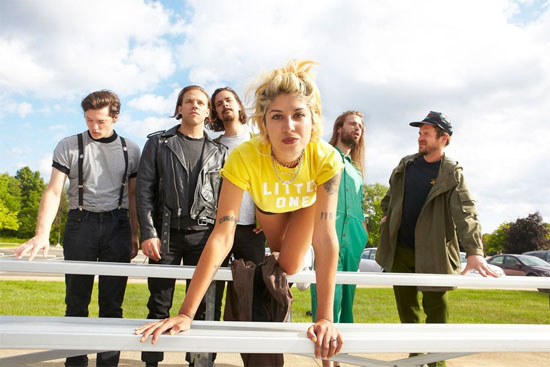 As the titles suggest, Hernandez’s latest release comes in both an English and Spanish-language version. But the differences between the albums extend far beyond language. Though they’re most built upon the same basic tracks, many of the song arrangements are often radically different from one album to the next. “Spanish tends to make things a little softer and a little more bubblegum,” Hernandez says. “So sometimes there were some weird creative calls I had to make to get the same edge that the song might have in English. I might have made the Spanish one a little bit grittier and dirtier just to evoke that same emotion.”

What’s more, the Spanish lyrics are not mere translations of Hernandez’s English lyrics. “I rewrote the Spanish songs with Milo Froideval, a friend of mine in Mexico City,” she explains. Hernandez sent the Latin Grammy Award-winner “all the lyrics in English, and then we sat down and I explained what each song was about.” Then the duo wrote new Spanish lyrics from scratch to fit each song’s theme, feeling or message.

“I use a lot of slang in English,” says Hernandez. “I use a lot of metaphor, and a lot of subtle things that sometimes don’t make sense in translation.” Singing en Español also means that in the Spanish rewrite of “Apologies,” Hernandez can get away with using a lyric and title phrase like “No me jodas mas,” which translates fairly straightforwardly into “Don’t fuck with me any more.” Hernandez says that “in English, that sounds very crass. But in Spanish, it’s just a normal thing that you would throw around. It doesn’t have the same meaning and evoke the same emotions when it’s translated.”

Making Telephone and Teléfono was more than a stylistic/linguistic exercise for Hernandez and her band. “There isn’t a lot of rock music in like the Latin music scene that comes from females,” Hernandez says. “And a lot of the rock musicians there still are more singer/songwriter, more folk-based. I really wanted to bring those heavier elements into the Latin album.”

For the group’s U.S. tour, most of the dates will feature Telephone‘s English-language lyrics and arrangements. But audiences will get to hear some of the Teléfono versions. “This is going to be kind of a learning experience for us,” Hernandez concedes. “I’m sure we’ll probably do a couple in Spanish every night. But I know there are certain cities – mostly in Southern California or the southwest – where at least 50% of our audience is bilingual or Spanish speaking. So we’ll see how that goes; maybe half of the set will be in Spanish.”

The band has 15 headlining dates in May through early June; more dates will be planned, but Hernandez says that she and the Deltas are in talks with some higher-profile acts “about potentially doing some bigger tours opening for them.” But one way or another, Jessica Hernandez and the Deltas will be on the road for most of the summer and fall in support of Telephone and Teléfono.