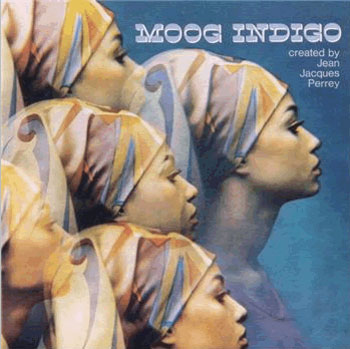 Perhaps Jean Jacques Perrey shouldn’t be thought of in the same context as Jean-Michel Jarre, Hans-Joachim Roedelius and other early pioneers of the synthesizer-as-musical-instrument. His work wasn’t as edgy and experimental as that of those other guys. But here’s the thing: a half-century on, spinning a Perrey album is far more likely to bring a smile to the listener’s lips than most anything by those other, more “serious” artists.

On one level, Moog Indigo is a demonstration record. It’s a document of just what can be done with Moog analog synthesizers in 1970. But it’s also a collection of impossibly catchy tunes, delivered in the most playful manner imaginable. Perrey was no dour experimentalist; he made records that were fun, full stop.

The sound textures brought forth on Moog Indigo are so dated, so frozen-in-time, that it’s difficult to listen without chuckling. Wah-wah guitars about. Churchy organ lines find their way into pop tunes. Bloops and bleeps of every imaginable texture flit in and out of the mix.

Most of the dozen tracks on Moog Indigo – now lovingly reissued on 180-gram vinyl in an extra-sturdy reproduction sleeve – are originals composed specifically for the record. Perrey himself had a hand in composing about half of them. Gilbert Sigrist’s “The Rose and the Cross” is one of the few “serious” tunes on the set, so it feels a bit out of context. Yet it’s still lovely. “Cat in the Night” sounds very much like Emerson, Lake and Palmer in a particularly goofy moment; the lead synth sweeps have a distinctly Emersonian texture to them.

“Flight of the Bumblebee” has a synthesizer tone that – while inevitably annoying – exquisitely suits the song. It’s pretty clear that Perrey and his unnamed musical associates took these sessions very seriously, but also manage to have a lot of fun in the process. Listeners open to this kind of thing should appreciate their efforts. “Gossipo Perpetuo” is the strangest cut on the disc; it sounds uncannily like someone’s playing sampled male and female voices. But such technology simply didn’t exist in 1970, so it’s up to the listener to sort out what might be happening. In any case, it’s delightfully weird.

If you’ve ever seen the old comedy/variety television show Rowan & Martin’s Laugh-In, then you might recall those bits in which the entire cast was dancing to some way-out instrumental music, punctuated every few seconds by some freeze-frame and comedic one-liners. Well, leave the jokes out and keep the dancing going, and Moog Indigo would make a perfect soundtrack. Try it for your next party, too.