The Allah-Las make original music that evokes the shimmering, melodic end of mid-to-late 1960s psychedelic scene. But because the members of the Los Angeles-based group write and perform their own material, they shy away from the “60s revival” tag. Still, there’s no denying that they honed their songwriting craft by absorbing the influences of that bygone era.

Much is made of the fact that several members of the Allah-Las worked at the sprawling Amoeba Music in Los Angeles. “We’ve been asked that question a number of times,” says Pedrum Siadatian, the band’s lead guitarist. He compares his time at Amoeba to working in a library. “You could get a little log book and take stuff out of the store,” he says. “We were able to find out what we really liked, and home in on certain genres that appealed to us.” 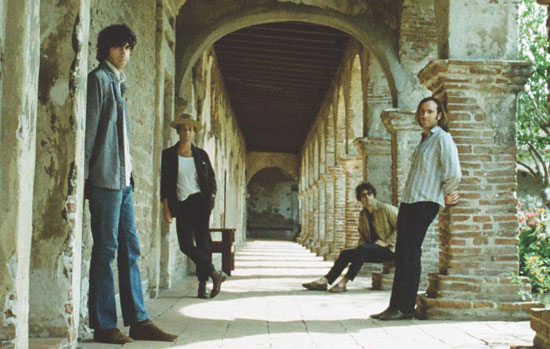 One thing that Siadatian and two of his coworkers/band mates (bassist Spencer Dunham and drummer Matthew Correia) agreed upon was an appreciation for garage rock and psychedelic music. “It’s something each of us discovered as we became more interested in music,” Dunham says.

Siadatian concedes that drawing on 1960s rock isn’t exactly a new idea for a modern band. But he believes creative success has more to do with how an artist uses those influences. “There are lots of bands that seem like they draw from ’60s and ’70s rock ‘n’ roll,” he says. “But each band tends to channel the things that they like about those bands and those genres in different ways. So there’s crossover with people who just like music that sounds like it’s older, or that draws from those influences.”

So despite their discovery of riches in the music of 40-plus years ago, once the Allah-Las got together in 2008, they didn’t take the oft-traveled path of playing covers. Instead, they began with their own material right from the start. “But they were incomplete songs,” Siadatian admits. “They were kind of jams that we would play … until it seemed like we were playing them too long. And then we’d do another one.”

Eventually – about a year into the band’s existence – the Allah-Las added a few select covers into their set, songs that felt right in the context of their original material. Siadatian recalls, “we used to do a Beat Happening song, and the Flamin Groovies’ ‘Slow Death.’”

Nearly three years after forming, the Allah-Las released their debut single, “Catamaran,” backed by a song called “Long Journey.” While “Catamaran” was an original number, the flip-side of the 45 was an obscure cover of a 1965 single recorded in South Carolina. The song, properly titled “It’s Been a Long Journey,” was the product of a Greenville combo called the Roots, and was written by a teenage guitarist named Rudy Wyatt.

As a fan of the Allah-Las, Asheville music historian and radio host Vance Pollock (of Asheville FM’s “Riffin’”) made the connection, and when the group first played Asheville, he brought Wyatt along, and introduced him to the band, who greeted him enthusiastically. So while Dunham goes to some length to differentiate between the Allah-Las’ original music and the music of the ’60s in general, he allows that “We’re very much inspired” by the kind of songs Wyatt was writing.

To some extent, the group’s signature sound is a product of the kind of gear used to make it. Both in the studio and – to a slightly lesser extent – on tour, the group favors vintage equipment. “Old Fender amps sound amazing,” notes Dunham. “Live onstage, we try to use the gear we use on the records. But sometimes,” he admits, “the vintage equipment isn’t sturdy enough to tour with.”

The Allah-Las often include Asheville on their tour itinerary. The band played the Mothlight in 2014, and four years ago the Allah-Las first performed in Asheville at the Orange Peel; that night’s bill included two other bands with a similar musical sensibility: Elephant Stone and the Black Angels. “We consider them kindred spirits,” Dunham says.

When it comes to live performance, the Allah-Las do seem to have absorbed an important lesson from the music of the mid 1960s, one that would be largely forgotten toward the end of that decade. Both on record and onstage, the Allah-Las tend toward succinct arrangements, with little in the way of aimless meandering. “Sometimes we fold in medleys or combine songs, or add an instrumental,” Dunham says. But usually we play the songs pretty much the way they are on the record.”

“We might do a longer intro or outro, but nothing too crazy,” says Siadatian with a chuckle. “We’re wary of being a jam band.”