Dave Davies: I think we were lucky because nobody could pigeonhole The Kinks, especially in the ’80s when there were a lot of bands that were making a certain type of sound. We always fought against that; we thought it was important to touch on different genres of music and different styles. Because humor was a big force of creativity to us; it really helped us a lot, and so it came through on so many records. 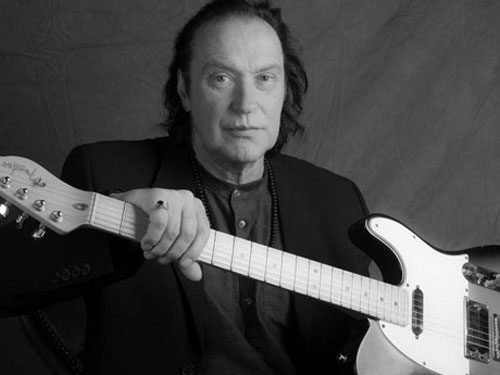 And then that eclectic feel came about because we grew up in a big family where everybody liked different things. You know, I had sisters that liked Fats Domino, Hank Williams, Dean Martin and such a collection of different artists. So we kind of grew up with all that eclectic sort of music.

In the late ’70s and early ’80s there was a British group who – to my way of thinking, anyway – very, very closely followed The Kinks’ style. The Fabulous Poodles … were you familiar with them?

I’m familiar with their name, but I can’t say that I remember the actual music. I’ll have to Google them.

The funny thing is, one of their albums was produced by [Who bassist] John Entwistle, of all people. It was very much in a Kinks style. They just added a fiddle; that was the thing they did differently. But the first time I heard them, I thought it was a new Kinks single; this would have been 1978 or so.

Hmm … the Fabulous Poodles … I’m going to Google them later.

You suffered a stroke about 13 years ago now, but obviously you worked your way back to health. Was there any point at which you thought “I might not be able to play guitar again,” or was that not the biggest thing on your mind at the time?

I just had times when I thought that might be the case but I was just concerned with getting as better as I could, getting well. I had a really good rehab team around me – really good people – so that helped. I always felt that I would get back in shape. But it’s hard work.

Tell me about Open Road, the new album featuring you and your son Ross.

Me and Ross recorded together before, but those were a bit more experimental and conceptual. We wanted to make an album of rock or pop songs, based on songs rather than experimental music. So we got together about a year or so ago, and we decided to put some of his ideas together with bits of mine. We worked very closely on a variety of ideas, and we’re very happy with it. I’m very excited about it.

Will you be featuring any of your music from that on this upcoming tour?

Yeah, I think that we’re going to be rehearsing three or four songs from that.

Can you tell me about the first experience that you had when you felt like you had “made it”?

Heh … that’s a funny question. I think the first time when I was a kid when I heard “You Really Got Me” I had that feeling of that maybe we are doing something. That was the first time. I’m just so glad we had such a great career. For myself, I’ve been fortunate to be a part of something … we had our ups and downs, but it’s pretty cool.

It was some 20 years ago that Ray did that VH1 Storytellers to great acclaim. You and he have both written autobiographies – although X-Ray is only sort of an autobiography – and clearly you and he have got different perspective on things. Have you ever considered doing that kind of thing where you tell stories between songs?

Yeah, I guess so. But it has to feel natural. Even now when I’m playing live, I don’t want to damage a solo by talking through it, telling the backstory behind it. But it’s something I do try to touch on. Obviously I’ve got a lot of stories to tell. Hopefully I’ll come out with another book; I hope that happens.

You’ve worked with drummer Dennis Diken both live and in the studio. He’s one of my all time favorite drummers. His name often comes up when I ask people to name their favorite all-around rock drummers. How did you come to initially work with him?

I knew Dennis from way back. Me and Ray did some shows with the Smithereens, just as impromptu guests, really. I’m very impressed by his style, his attitude and just him in general. He’s a real classy drummer; he knows all the moves and he’s great and instinctual. He’s got to be one of the world’s top-class rock’n’roll drummers, I think; he has to be. It was great when we got together, when he started to tour with me and Mike Mesaros. I love touring with him; it’s great. We have a good time.

Who else is in the band?

Well on this tour we’re doing a three-piece. It’s me, Dennis and a longtime friend of mine, a producer and bass player called David Nolte. He produced or co-produced a couple of my albums, and so we’ve worked together a lot. So I’m looking forward to the next couple months or so.

Ray joined you on stage a little over a year ago. Has there been any talk of you and he doing anything together?

Yes, after that we got together and we put some ideas together in song. We had three or four ideas that we were going to record, but we didn’t quite get ’round to it. I went into the studio, and he was working on his Americana album. So all that kept us from pursuing it, really. But the songs are still there, so I’ll touch base with him at some point.