Tommy Keene and Ivan Julian recently completed a dual solo tour; just ahead of that run, I spoke with Keene. It was the third time I had interviewed him since 2006. — bk

Though he got his musical start in the Washington DC area, guitarist Tommy Keene has a real connection to the music scene in New York City. And he explored that connection on his recent tour with Ivan Julian.

Keene is most often thought of as a power pop artist, though his music has always traveled beyond that genre’s confines. His friendship with Julian goes back to the 1970s, a time when Julian was playing guitar with Richard Hell and the Voidoids. 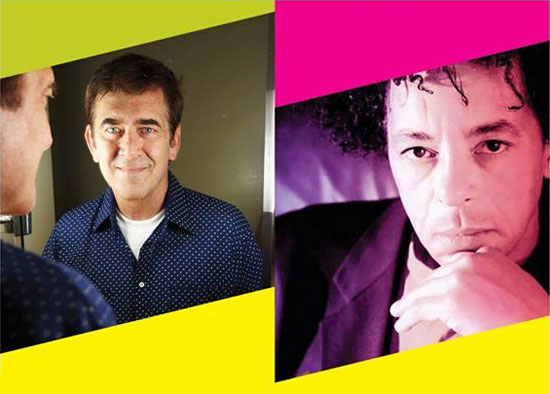 At that time, Keene and bassist Ted Nicely were in the popular D.C. area band Razz; Nicely had grown up knowing Julian, so when they were in NYC, they connected. “W“e met him at Max’s Kansas City,” Keene recalls. “Ivan and I kind of hit it off.” Not long after, the Voidoids broke up. Julian started a new band, The Outsets, with former Feelies drummer Vinny DeNunzio.

And at almost the same time, Razz broke up. Ivan invited Keene to join The Outsets. Keene headed for New York, and ended up spending a few months in the East Village. “I got to the point where I could walk up to CBGB’s and they’d say, ‘Come on in’ because I was a friend of Ivan’s.”

Meanwhile, though he and Julian were musically like-minded, Keene passed on joining The Outsets. “I almost joined, but I didn’t, because I got an offer to go on tour with Suzanne Fellini,” Keene recalls with a chuckle. “She had one album on Casablanca, and the money was too good to resist.”

The Outsets would go on to release a single, an EP and an album; Julian would go on to work with The Clash, Shriekback, Matthew Sweet and Brooklyn garage rock masters The Fleshtones. Keene began a solo career in the early 1980s, and has since released more than a dozen critically- acclaimed albums.

All the while, Keene and Julian stayed in touch. The two were chatting last October, not long after Julian won a battle with cancer, an experience that briefly sidelined him. Last year, the two decided to put together a tour for Spring 2017. “After the last couple electric tours, I wanted to simplify it,” Keene tells me, adding with a chuckle, “and maybe even come home with some money.”

“Ivan asked me, ‘What are you doing next?’ I told him I was going to Japan for some live dates, and then I would be doing a solo tour. He said, ‘Can I jump on that?’” Keene readily agreed.

While Keene had mounted countless tours with a full band – he recently completed a successful tour in Japan – this ten-date run wasn’t his first stripped-down outing. “I’ve done it a lot in the past,” he says. “The first time I did it was in ’87; I did about 15 shows with Alex Chilton, and about five shows with the Feelies.” He admits that back then, “I didn’t know what I was doing, and I had this huge stack of money. I was pretty irresponsible.”

These days, with an impressive back catalog and a dedicated following, Keene takes a more serious approach to touring. And though on paper their musical backgrounds might seem quite different – Keene is a master of melody while Julian is known for a more hard-edged approach – each man’s set complemented the other. And toward the end of each show, Julian and Keene teamed up to play a few songs together.

“I think it will be really interesting,” Keene told me on the eve of the tour. He was clearly excited at the prospect of touring with his old friend. “We both like a lot of the same music. He’s a little more into the bluesy, jazzy, punk side and I’m a more melodic guy. But it works!”

“Ivan has a rich history,” said Keene. “He’s a really interesting guy. He’s fascinating, he’s hilarious, and we hadn’t worked together in so long.” And with Julian in good health after a recent bout with cancer, the time is right to head out on the road. “Touring with a band, there are a lot of expenses,” Keene said. “You’ve got salaries, flights, a van, gas … all kinds of things. This tour, we have somebody to drive and help with merch, but it’s a completely different animal with just me and Ivan. And it will be more of an event.”