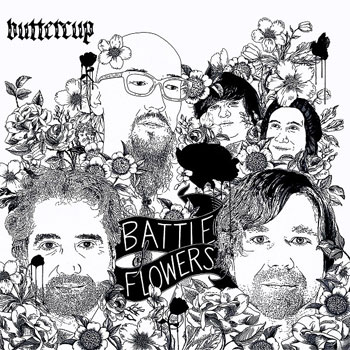 File next to: Sugar, Crowded House

With a name like Buttercup – not to mention album art scattered with flowers – one might expect Battle of Flowers to be a collection of winsome, treacly pop. Alas, no: slashing electric guitars abound here. The melodies are rooted in pop convention, and every song has a strong hook, and there’s an anthemic quality to some of the group’s songwriting. Clever arrangement details are employed: “Gud Girls” shifts between minimalist, almost all-vocals sections and a twitchy, new wave rave. Shade and light is a big part of the Buttercup approach: one moment “How to Think More About Sex” finds the singer shouting aggressively about wanting a tender touch; the next, a vocal chorus plaintively asks “why don’t you love me any more?” The group’s sense of humor comes through on “Open On/Shut Off,” which conjures thoughts of Stewart (Police) Copeland’s Klark Kent persona.