Martin Scorsese’s 1978 film The Last Waltz documented what had been billed as the farewell performance by The Band. That five-piece group of journeyman musicians came to fame through their association with Bob Dylan, but the Band’s musical pedigree extended well before and beyond serving as Dylan’s backing group. The Last Waltz brought together many of the musicians with whom the group had worked, and the all-star concert film is widely recognized as one of the best of its kind.

Last November 26 marked the 40th anniversary of the concert, and a current-day aggregation of all-star musicians mounted a New Orleans concert to commemorate the date. An outgrowth of that successful show is the Last Waltz 40 Tour, fronted by Warren Haynes (Gov’t Mule, The Allman Brothers Band) and former Doobie Brothers vocalist/keyboardist Michael McDonald. 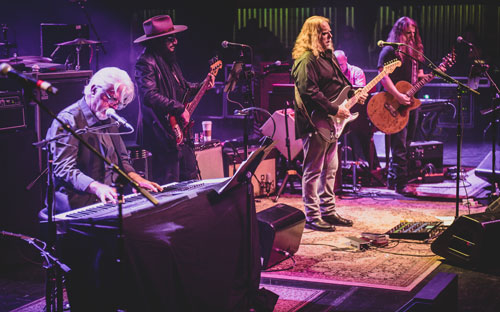 Haynes’ first exposure to the concert was upon hearing the 3LP set released in 1978. “Some of my older brother’s friends and people like that had it,” he recalls. “I would just see it in people’s record collections.” The album made quite an impression on the guitarist, then still a teenager. “Having all of those people in the same place performing together was unprecedented.”

Haynes was impressed not only by the music of that 1976 concert, but by the people involved in the show. “There was such an amazing array of artists,” he says, noting that the concert’s cast of characters reflected the special and unique nature of the event. And the Last Waltz 40 tour – something that grew out of a single concert last fall in New Orleans – “was based on a similar diversity,” Haynes says.

The idea for the tour came from executive producer Keith Wortman of Blackbird Presents, the company that produces Haynes’ annual charity event, the Christmas Jam in Asheville, N.C. “Keith had the original idea,” Haynes says. “He and Don Was called me to see if I would be interested.” Haynes agreed immediately.

The original Last Waltz brought friends and associates of The Band together onstage; the lineup included Bob Dylan, Neil Diamond, Ronnie Hawkins, Ringo Starr, Neil Young, Van Morrison, The Staple Singers and many others, creating a once-in-a-lifetime who’s who of that era’s popular music. Such musical gatherings are less common in today’s more segmented musical landscape, but the Last Waltz 40 tour aims to recreate that communal spirit.

In addition to Haynes and McDonald, the lineup includes country singer-songwriter Jamey Johnson, bassist-producer Don Was, Haynes’ drummer Terrence Higgins, blues guitarist “Steady Rollin’” Bob Margolin, New Orleans-based guitarist Dave Malone (formerly of The Radiators), trombonist Mark Mullins of Bonerama, and New Orleans multi-instrumentalist Ivan Neville. Haynes says that he and his band mates in the project all agreed, “Yes, let’s just see what happens and not put any sort of demands or parameters on the music other than it should reflect and represent The Last Waltz.”

Having three very different vocalists – Haynes, McDonald and Johnson – allows the Last Waltz 40 ensemble to cover a lot of stylistic ground. “That kind of represents the whole concept of The Band,” Haynes says. “We’re patterning our approach to the music after [the original Last Waltz], but doing it in a way that reflects our own taste and our own kind of organic approach to music.” Haynes believes that the result is something that feels and sounds natural.

The Last Waltz 40 Tour makes no attempt at a start-to-finish recreation of the November 25, 1976 concert in San Francisco. That original Last Waltz was a marathon concert, running some four hours long. For the New Orleans show, Haynes says that he and his musical associates “just picked the stuff that we wanted to tackle. And the tour will be similar, although we’ll have more chances to shake it up a little bit.” From the earliest tour rehearsals, the musicians all agreed to take an open-ended approach to the music and set list.

That mindset hold true for the tour’s future plans. The current tour schedule features about a dozen dates; Haynes is guarded beyond that. “There’s talk of maybe doing some more,” he says. “We’ll see how everybody’s schedules work out.” And what about the possibility of featuring some of the original concert’s guest performers? Many are still alive and actively performing, including Dylan, Dr. John, Eric Clapton, Neil Young, Neil Diamond, Van Morrison, Ringo Starr, Mavis Staples and Emmylou Harris. Haynes is noncommittal: “I guess we’ll see how that goes as well,” he chuckles.

New Orleans musical legend Allen Toussaint was a key part of the original Last Waltz; he composed all of the horn charts for the ’76 concert. Toussaint died in 2015, and the November ’16 show in New Orleans was specifically a tribute to his memory. Following on from that, The Last Waltz 40 Tour makes use of Toussaint’s arrangements. Haynes says that as the group planned the tour, they agreed that “it would be nice to put a little extra New Orleans spice in it” by honoring Toussaint.

Some of the key figures in the original Last Waltz are long gone (Muddy Waters; Paul Butterfield; Roebuck “Pops” Staples; concert producer Bill Graham; and The Band’s Rick Danko, Garth Hudson and Richard Manuel to name just a few), but the Last Waltz 40’s diverse musical personnel stand a good chance of evoking the various styles those people brought to the original. “We’re looking to put our own slant on it,” as well, Haynes says.

Looking back to the original concert, Warren Hayes again makes note of the concert’s wide array of featured performers. “It was all people that had some sort of connection to The Band and their music. That was a very special time, and that cast of characters represents that.” With The Last Waltz 40 Tour, Haynes and his crew are doing their best to recreate the excitement and sentimental vibe of that legendary concert.