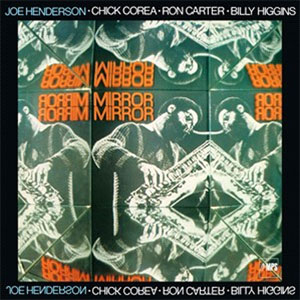 One of the most consistently thrilling qualities of jazz is the manner in which artists team up in different combinations, often just for a single session. Whether onstage or within the confines of the recording studio, the result of these musical summits is always open to chance and circumstance; therein lies much of its appeal.

And while 1980 was nobody’s idea of a high point in jazz, this set for MPS – recorded not in Germany’s Black Forest but in a Los Angeles studio – has all the thrill and musical interplay one could hope for from the four superb artists who took part.

There are no electronics to be found here: the piano and bass are acoustic instruments, and the live-in-the-studio vibe is very much apparent. Six numbers – three per vinyl side – are on offer: one by nominal bandleader Henderson (Joe’s Bolero”), two each from the pens of Corea and Carter, and one standard, “What’s New.”

Ron Carter’s “Candlelight” is primarily a showcase for Joe Henderson’s mellifluous sax work, though near the song’s end Corea takes a largely unaccompanied solo turn. The bassist’s “Keystone” features some appealing unison playing from Corea and Henderson. Higgins turns in some splashy yet controlled drumming.

As one might expect from reading the title, that drumming is at the center of “Joe’s Bolero.” But there’s much more in the way of melody here than in Ravel’s somewhat monotonous classical piece. Henderson’s sax here is unbridled – detractors might suggest “out of tune” – but the one-chord workout is fascinating in its own way.

“What’s New” is the shortest cut on Mirror, Mirror; it’s also among the most tradition-minded reading in the set. Placed between “Joe’s Bolero” and the final track, it’s an example of thoughtful sequencing. The record closes with “Blues for Liebestraum,” a lengthy workout in which all four players push the boundaries of the blues form, often all “soloing” at once. It’s a tasty closing to an album that may have escaped the notice of many jazz fans on its original release. The 2016 MPS reissue is 180g vinyl inside the label’s customary high-quality packaging.