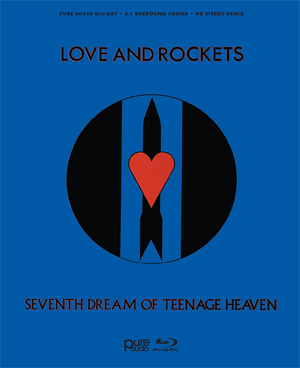 File next to: Siouxsie and the Banshees, Psychedelic Furs

One of the problems with hit records is that they’re often too representative of the era in which they were made. Whether it’s production values, instrument choices or general approach, too many songs all but scream “1980s!” when they’re played decades later. It’s the rare release that transcends this to become timeless. Formed in the wake of goth rock heroes Bauhaus‘ dissolution, Love and Rockets took their music in a much more pop-leaning direction. And despite a few of those ’80s trappings – drum machines, synthesizers – 1985’s Seventh Dream of Teenage Heaven sounds nearly as fresh more than 30 years on. The massed vocal harmonies, shimmering guitars and subtle nods to ’60s psychedelia pointed the way to a bright future indeed for the British trio. This Blu-ray reissue provides a lush remix for 21st century fans of quadrophonic stereo.