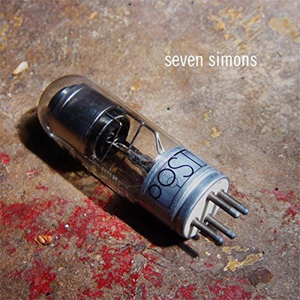 Athens, Georgia was fertile musical ground in the 1980s. Looking beyond the biggest names – R.E.M., the B-52s, Pylon and (briefly) Matthew Sweet – one could discover a vibrant music scene. Some of it was chronicled in Tony Gayton‘s 1987 documentary, Athens, GA: Inside/Out. But even that film didn’t cover all the worthy music coming out of the college town.

It would be easy to lump Seven Simons in as also-rans; while they did release tow albums – 1988’s Clockwork and Four Twenty-Four in 1991. But despite some solid indie cred – the first album was released on R.E.M. Manager Jefferson Holt‘s Dog Gone Records, and the second came out on then-hip indie label TVT – neither record made much of a dent in the musical marketplace.

They scored what in retrospect seems like some great opportunities: they toured, opening for hot acts like The Fixx and A Flock of Seagulls, and their booking was handled by Ian Copeland‘s F.B.I. But shifting lineups didn’t help Seven Simons’ musical momentum, either: core members Nathan Webb (vocals) and guitarist Keith Joyner were the only holdovers between the first and second record. As the story goes, when Four Twenty-Four flopped, the band lost its following.

Joyner and Webb held on for awhile, but eventually the band folded. But prior to calling it a day, the group cut a dozen songs at Don McCollister‘s Nickel & Dime Studios in the Avondale Estates neighborhood of Atlanta. Those recordings languished unreleased for decades, and Seven Simons’ mainstays went their separate ways. Joyner landed a touring gig with The The, filling the spot recently vacated by Johnny Marr; Webb got married, started a family and left music altogether.

But those unreleased recordings beckoned. When Joyner and Webb reconnected around 2013, they found that their musical connection remained strong. Enlisting the aid of both of Seven Simons’ rhythm sections – the Clockwork lineup of bassist William Mull and drummer Michael Zwecker, and the Four Twenty-Four rhythm section of bassist John Gusty and drummer Travis McNabb – they cut three new songs. The three new tracks open Post, the first new Seven Simons album in 25 years.

Of those three cuts, “Rhyme of Fallen Leaves (made with the Clockwork lineup) is closer in spirit to Seven Simons’ ’80s material, with a memorable and chiming guitar figure serving as a counterpoint to Webb’s melancholy yet assured vocals.

The remainder of Post‘s 18 tracks were cut either between the two original albums, or shortly thereafter. The most notable contrast between these older tracks and current-day Seven Simons is Webb’s voice: on the older tracks, the intentionally British-flavored mannerisms of his vocals strongly evoke Echo & the Bunnymen‘s Ian McCulloch, with a dash of Duran Duran‘s Simon LeBon.

There’s nothing in the previously-unreleased tracks on Post – writing, arrangement, production – that provides easy answers as to why Seven Simons didn’t find more success. The hooks are numerous, the songwriting is solid, the musicianship – especially Joyner’s lead guitar work – is inventive without being showy, and the production aesthetic is less dated than much of what came out of that era.

Webb’s guitar heroics do occasionally call to mind other trendy bands of the day, but they’ve aged quite well. Once could easily compile a mixtape of the best “college rock” of the late 1980s and slip several songs off Post into the mix, and few would notice anything amiss.

A shorter, edited version of this review was published previously in Stomp and Stammer Magazine.