Trampled By Turtles’ Two Daves Take it Slow and Steady

Trampled By Turtles is a darling of the Americana scene and the festival circuit. And while the Minneapolis-based group played a number of shows this summer – including sold-out performances at Red Rocks – they’re currently on hiatus, and their future is uncertain. All five members are busy with other musical projects, and two members – guitarist Dave Simonett and banjo player Dave Carroll – scheduled eight December shows in Colorado.

Carroll describes the duo format as a “stripped down version” of what they do as Trampled By Turtles. “What makes it nice for us is that it’s simple,” he says. “There’s a lot of space to have fun with.” Some of the set list was planned out at rehearsals. “We do a mixture of TBT songs and some of Dave [Simonett]’s songs from his other band, Dead Man Winter. So far it’s just been guitar and banjo, but we might include some other things in the future.” 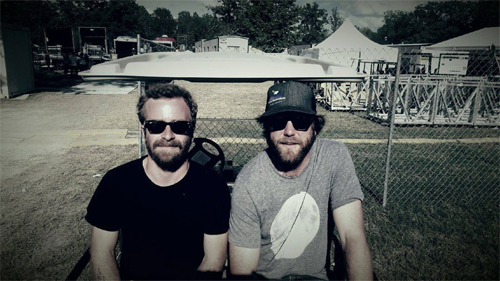 That minimalist approach has several advantages. “It’s a lot easier to travel, and it’s really simple to set up,” Carroll says. “We just fuel up, plug in, make sure everything works, and then … we just go.” The first time Carroll and Simonett performed as a duo was after last year’s Red Rocks show. Carroll – who relocated to Colorado a couple of years ago – suggested the idea. “We had some time off, and it just came together,” Carroll recalls. “Our agents found some shows for us to do, and it worked. We discovered that it was a lot of fun.”

The tone of the duo shows is quite different from a Trampled By Turtles show. “It’s a little less of a raucous show … a lot less, actually,” laughs Carroll. “It’s mellow, for the most part.” That quieter, understated approach opens up their music to a slightly different audience. “Sometimes I hear people say, ‘I used to love those days when we’d be the only people in the bar.’ And maybe some of those people are getting a chance to come see us, sit a little closer and hear a little better.”

“We used to do a lot of shows in smaller venues with smaller crowds when Trampled By Turtles were in their early years,” Carroll says. “And now we’re coming back to some of those venues that we played, but it’s just Dave and me. These are more listening type crowds. I think we have some of our fans from Turtles, and maybe they’ll bring somebody who hasn’t heard us but who is just into a more mellow show.”

Quieter audiences are a double-edged sword, Carroll admits. On one hand, the smaller-scale gigs offer less pressure. “But when it’s a sit-down crowd, they can definitely hear a wrong note. So there’s a different sort of pressure put on.” Carroll believes that the versatility of acoustic instrumentation accounts for some of Americana’s crossover appeal. “You can always have an acoustic instrument in a band, whether it be a rock band or an Americana band,” he says. “Even a fiddle can go with any kind of genre; It stays there within the relativity of the music.”

So what does this tour – and Simonett’s dates with Dead Man Winter – mean for the future of Trampled By Turtles? “It’s sort of up in the air right now,” admits Carroll. Dead Man Winter (which also includes TBT’s bassist Tim Saxhaug) will release their second album in January. “Erik Berry has a mandolin project; our fiddle player Ryan [Young] is busy with many different bands in the Minneapolis area, and he has his own recording studio.” Carroll plays in a couple of other bands as well. “So for the foreseeable future, Turtles is up in the air,” Carroll says. “I believe at some point – maybe next year – we’ll get together and talk about it and figure out what the next plan is.”