Shonen Knife: Sharp as Ever

The Japanese have long had an odd fascination for specific bits of Western pop culture. Even if confining the discussion to pop music, there are myriad examples. The 1960s garage rock movement in the US gave way to Japan’s own homegrown variant, the so-called GS (“group sounds”) movement. A Japanese answer to ’80s “hair metal” was popular for quite awhile, too.

So it shouldn’t come as a major surprise that Japan would have had its own celebrated pop-punk trio. What is perhaps a bit eyebrow-raising is that that group – Shonen Knife – has been around for a very, very long time. In fact last December marked the 35th anniversary of the group’s founding. 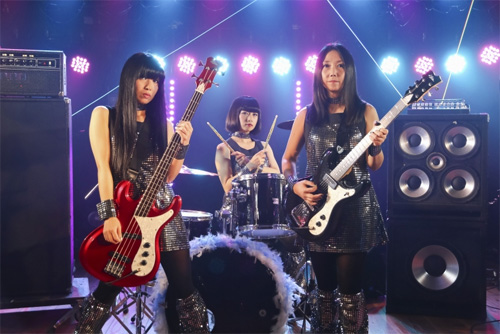 In that time, Shonen Knife has released nearly two dozen albums of their spunky, peppy and just slightly off-kilter revved-up pop. Their album titles alone will give the uninitiated a sense of the mindset at work here: Let’s Knife (1992), I’m a Supergirl (2001), and perhaps most pointedly their 2011 tribute collection, Osaka Ramones.

If further evidence is needed, one need only dig beneath the album covers and take a look at the song titles. Their self-titled 1990 disc was the first to gain wide distribution in the west, and included “Twist Barbie,” with its immortal refrain, “I want to be / Twist Barbie.” Other popular lyrical subject matter for Shonen Knife includes tea, robots, shopping, wasabi and cotton candy clouds.

So there you have it, except that their ditties are delivered in righteously rocking style by three women. Though the lineup has changed a bit in their three-plus decades together, founder Naoko Yamano still sings and wields a guitar. The group’s 2014 album Overdrive bent their sound in the direction of 70s hard rock a la Deep Purple and Thin Lizzy, with unexpectedly impressive results.

Their latest, Adventure, straddles between that approach and their more tried-and-true pop/punk origins. “Jump into the New World” is – by Shonen Knife standards – a bit more lyrically deep, though it still speaks of having a “song in your heart.”

Ultimately, the trio’s juxtaposition of chirpy vocals with buzzsaw guitars and a straight-ahead beat has served Shonen Knife well for decades, so there’s no good reason to tinker with the formula. Instead, listeners can enjoy the slightly goofy – but undoubtedly heartfelt – sentiments of tunes like Overdrive‘s “Rock’n’roll T-Shirt.” Rock on, Shonen Knife.