Wes Tirey: In Print and On Record

Last fall, Bob Dylan won the 2016 Nobel Prize for Literature. That news is a reminder that, at their best, music and the printed word can be two sides of the same creative coin. Black Mountain-based singer-songwriter Wes Tirey subscribes to that idea. Tirey recently celebrated the release of a book of his lyrics as well as his new album, Black Wind, with a show in Asheville, North Carolina. 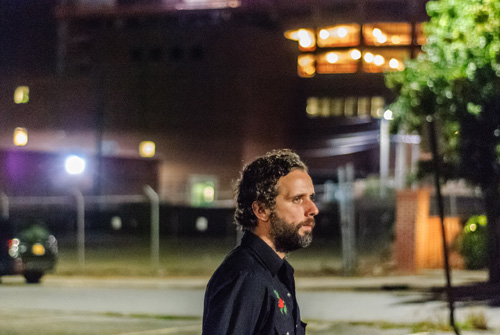 “Simplicity is, at least subconsciously, some kind of songwriting principle,” says singer-songwriter Tirey. “That might be the trajectory that most songwriters are on: reaching a point of achieving simple material.” Tirey stresses that simplicity and complexity need not be mutually exclusive; in fact the lyrics to the six songs on Black Wind are at once evocative and open-ended. “Once you write [a song] and put it out there, your own artistic interpretation just remains your own,” he says. “But when you’re sharing it with other people, it becomes something else.”

In tandem with the release of Black Wind, Tirey is publishing a book – more a chapbook, he says – of selected lyrics. The collection showcases some of Black Wind‘s song lyrics, plus words from songs on his earlier cassette-only releases. And though Tirey’s lyrics hold their own on the printed page, he doesn’t consider them as poetry. “Songs are meant to be sung,” he believes. “And I think songs are ingested differently than poetic material.”

Speaking of poetry, Allen Ginsberg was a proponent of the credo, “first thought, best thought” as an approach to writing. Tirey doesn’t agree. “’First thought, best thought’ is a dangerous thought,” he chuckles. He thinks the idea is “something of a myth, more of a romantic idea that this divine stream of artistic thought is elevated above spending time working on the material.” He places great value on taking time to craft word and lyrics. “Sure,” he says, “I can get a verse that comes together in a minute. But then the rest of song may take three weeks.”

One quote that Tirey does appreciate is credited to the recently-passed songwriter Leonard Cohen: “If I knew where all the good songs came from, I would go there more often.” That makes sense to Wes Tirey. Good songwriting comes, he beehives, from a combination of a kind of inspiration coupled with deliberate effort. The describes the first part of that equation: “You get that visceral feeling about a song coming your way, but it doesn’t just reveal itself in it’s entirety.”

So then comes the second part. “People don’t see the moments when you’re alone in a room at 2 o’clock in the morning, banging your head against the wall looking for one or two words to finish a song,” he says. “Or pacing around the neighborhood, trying to pull it out of thin air … or wherever it comes from.”

Many of Tirey’s previous releases have been instrumental, exploring the possibilities of the largely acoustic instrumentation. And while Black Wind makes effective use of both acoustic and electric guitars, the arrangements are spare. “I’m attracted to that aesthetic of not having too much going on,” he says, “or at least not putting anything in there that doesn’t need to be there.”

Still, the wide-open nature of the album’s sound wasn’t exactly deliberate. “The songs themselves lend themselves to a lot of space,” Tirey says. “I don’t apply some kind of aesthetic intention; it just happens that way.” When it’s suggested that there’s a southern Gothic feel to his songs, Tirey demurs a bit, suggesting instead “just an American ethos.” For him, songwriting is “an exploration of an American aesthetic, one I’m continuing to explore. Sometimes, it turns out as a love song, or a song about longing, or a song about desperation.”

For the Mothlight show, Tirey sang and play guitar, backed by a drummer and electric guitarist. The band performed Black Wind in its entirety, plus other songs from Tirey’s catalog. He’s very pleased that Itasca (also known as Los Angeles baroque singer-songwriter Kayla Cohen) opened the show. Itasca’s new album – “super beautiful record,” says Tirey – was released by Carrboro, N.C.-based label Paradise of Bachelors. “So,” Tirey smiles, it was “a night of mellow folk songwriter stuff.”