In addition to his work with Yes and Yes-related projects, Rick Wakeman has had a long, successful, and prolific solo career. [Shameless plug: I wrote the liner notes for CD reissues of two of Wakeman’s albums, Rick Wakeman’s Criminal Record and Rhapsodies.] Today I present the portion of our interview covering his solo work, and get in a couple of questions (and answers) about other random topics. – BK

Bill Kopp: Starting with Six Wives of King Henry the Eighth back in ’73, you averaged one solo album per release a year up until about ’91. And then at that point, it was amazing: you started releasing multiple albums every year for a while, only slowing down to the output expected of a mere human, I guess, around 2009. I’m guessing that new musical ideas must rise forth from you. 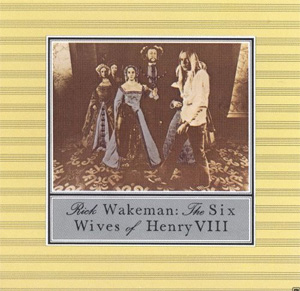 Rick Wakeman: They do, but also, there’s an interesting thing that happened in the ‘80s. I mean, suddenly the music that I loved and that I had been doing a lot of – symphonic rock, progressive rock – was about as popular as a prophylactic machine in the Vatican, really. It was the pawn of music. What happened was then, record companies started fragmenting, and they’d go, “Hold on a minute. What am I doing here?” And I was getting record companies from different countries asking me for different things, so Japan was asking me, “Can you do some instrumental synthesizer albums?” Certain parts of Europe were asking, “Can you give us some kind of New Age kind of music?” Every country was coming about looking for different things.

So I was in the studio doing different albums, originally, for different countries. That’s why the output was so big. And then, of course, I started get people writing saying to me, “Why is it that you’ve released such and such an album in Japan but we can’t get it in Canada, or we can’t get it Russia?” And so we went “Hold on a minute, what we need to do is to make everything available.” Which is basically what we did at the end of the day.

BK: In recent years, I’ve noticed you’ve done a lot for, for lack of a better expression, gun-for-hire work for Cleopatra and its associated labels. I’m assuming that the way those work, pretty much, is that you get a track, you create your keyboard part and email back. So there’s no physical interaction with the other musicians.

RW: Basically, I mean, they’re fun to do. I’ve spent most of my time in Europe doing concerts, and plus – it’s not really known in America – I have sort of a flourishing television career here. I do a lot of TV, so that’s really busy for me. I spend a lot of time here.

But it started with Billy Sherwood. He said, “Hey, can you play on a track for me?” And I said, “Yeah. Why not?” So he sent over the files, and I went into my studio. He said that I had the freedom to play what I like, send it back, thank you very much.

And then he said, “Do you want to do another one?” “Yeah. Ok.” And they’re just nice. Fun to do. And so there’s a few that I get asked to do from other people. And if I hear them and go, “You know what? I can’t do anything with this,” – and that happens a few occasions – I’ll say, “I’m really sorry; I can’t do with this one.” And that’s fair enough. These things happen. It’s a sort of a mixture: some you can, and some you can’t. I won’t do things for the sake of doing them. If I feel I’ve got something to offer, I’ll do it.

BK: When you’re not making music do you listen to other people’s music, and if so, is there anything current that you enjoy?

RW: There’s a lot of stuff that I really like that’s floating around. I was going to say my kids play things for me, buy my kids are getting older now; they’re all in their 30s or 40s. So it’s starting to be the grandchildren saying to me, “Hey, Grand-dad, have you heard this?” There’s a lot of good young artists going ’round in the UK.

What really upsets me is that in the last few years there’s a lot down to programs like The X Factor and America’s Got Talent. There is so much focus on the singer. You have The Voice, and we have it over here in England. And you go, “Hold on a minute.” The great thing about music was that back in – and I’m not trying to say “the good old days,” – in the ’60s and ’70s and even ’80s, people went, “what a great guitar player,” “there’s a great bass player,” “there’s a great drummer.” And the instrumentalist, the musician, could really flourish as well.

I listen to a lot of music from … I get sent a lot from other countries, some prog music. And some of it’s really, really good. There are some good bands, some good players and things around. I just randomly pick up CDs off the shelf and throw them in the car when I go out. And then occasionally I go, “That’s pretty good. I’ll just check that out.” I think that the record companies – which aren’t what they used be; we all know that – I think it’s about time they recognize some of the instrumental talent that we have within bands of people who play.

BK: One last question, if you don’t mind, and this one is totally off topic.

BK: There’s a long-standing rumor that you encouraged A&M to drop the Sex Pistols. True or False?

First of all, I never had any influence over….no artist has any influence over a record company, but also, if anybody at the time…my argument was “Hold on a minute, you’re trying to tell me that I’ve got that kind of influence? Give me a break. I mean, are you mad?”

But they put out and it got a lot of [press]. Which was a big shame. I was incredibly angry. It was one of those things. Then in the last there years, there’s a television program in England where it all came out. He said, “No. Nothing to do with Rick. We made it up to get the chairman off the hook.”