Today I take a look at five DVDs, all of which should be of interest to aficionados of 1960s pop culture, and all available only from The Video Beat. 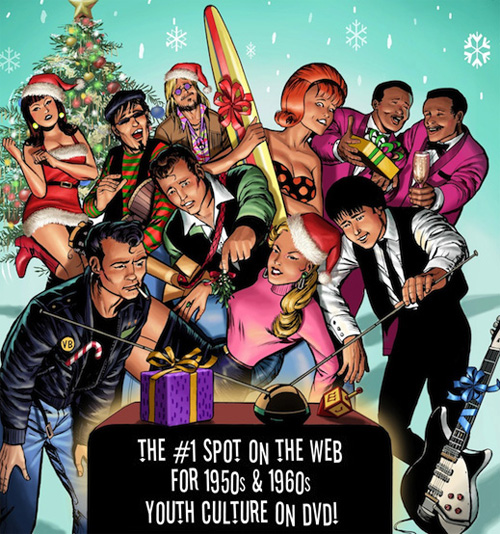 National Bandstand & Dig We Must (DVD)
These two programs were broadcast on Australian TV in November 1965 ( the 48-minute National Bandstand, subtitled “The New Wave on Stage”) and December 1966 (the 57-minute Dig We Must). Both are presented here in black-and-white. Transfer quality is merely okay on the former (better on Dig), but the overall sound’s fine, and the energy is top-notch, T.A.M.I. Show-style. Several of the bands rock quite hard as they tear through familiar covers. Watch for the Aztecs, rocking out on tunes including “Poison Ivy” and featuring a young Billy Thorpe, many years before his sole US hit, “Children of the Sun.” ORDER National Bandstand & Dig We Must HERE, exclusively from The Video Beat

Teenage Pop Culture 1967-1967 (DVD)
A trio of documentaries – one each from the USA, UK and Australia – attempts to explain the mysterious teenage phenomenon of the 1960s. The American one, “The Affluent Teenager” is just as hopelessly square and culturally tone-deaf as you could hope. The British doc has the benefit of being in, er, “colour.” It straddles squareness and an earnest interest in the subject. The Australian adults seem even a tad hipper, and actually ask teens what’s up. Not noted in the packaging is a bonus clip of the Beatles on U.S. TV show Shindig. The other bonuses are also cool. ORDER Teenage Pop Culture 1967-1967 HERE, exclusively from The Video Beat

C’mon: 1967 New Zealand Pop Music (DVD)
It fascinates me to no end to discover more about the 1960s pop music scenes of countries beyond the USA and UK. The Video Beat does important work in unearthing and compiling these collections. C’mon aired February through August 1967, and the first and last episodes are on this DVD. You won’t know the NZ acts, but you’ll likely respect their spirited and well-chosen songs, including The Move‘s “I Can Hear the Grass Grow.” These performances really do rock, and the arrangements are top-notch. A bonus compilation of other New Zealand pop clips is also a great deal of fun. ORDER C’mon: 1967 New Zealand Pop Music HERE, exclusively from The Video Beat

Jeunesse Oblige Discotheque (DVD)
The loose translation of this French-Canadian TV show’s title is “Youth must be served.” Three episodes (two from ’66, one from 1964) give viewers an idea of what the dance scene was like in Quebec and Montréal. Even in black and white, the eye-popping costumes will dazzle. I”m guessing Jenny Rock wasn’t her birth name, but the gal sings and swings convincingly enough on Rufus Thomas‘ “Walkin’ the Dog.” Elsewhere is some credible fuzzed garage rock (with great vocal harmonies) courtesy Les Aristocrates and Les Chats Hutteurs. The overdriven bass suggests this might’ve been cut live. Truly weird bonus clips. ORDER Jeunesse Oblige Discotheque HERE, exclusively from The Video Beat

French-Canadian Beat Rarities (DVD)
If Jeunesse Oblige Discotheque (above) whetted your appetite for more Francophone Canadian pop culture, this is the ticket. Some of it’s even in color! The selections are surprisingly varied. Some of the video quality borders on the abysmal, but overall it’s quite watchable, and owing to the rarity of this stuff, it’s worth the effort. Even the deepest crate diggers will likely be unfamiliar with most of the performances collected here. Stick around for Les Lutins‘ fuzzed-out “Je Suis de Bois.” It’s proof that snotty teenagerism wasn’t purely a produce of the USA. These guys rock like they mean it. ORDER French-Canadian Beat Rarities HERE, exclusively from The Video Beat