Winner of the 1999 National Medal of Technology and Innovation, technology futurist Ray Kurzweil has some controversial – and inspiring – ideas. Kurzweil is an outspoken theorist who believes that before this century is over, Earth will see development of a hybrid human-machine civilization. In popular entertainment, that idea can be taken in several directions; the Sci-Fi Channel’s Battlestar Galactica series explored a dark, dystopian version of those concepts; a brighter, decidedly more positive take on Kurzweil’s ideas can be found on IO, the latest album from Asheville-based group Analog Moon. The group premiered the work with an album release performance at  Asheville’s Mothlight on September 23.

“I had seen Transcendent Man, the documentary about Ray Kurzweil,” recalls Analog Moon songwriter/musician Todd Britton. He thought that Kurzweil’s ideas about the future would make a fun concept for an album, especially if he could “take it in a sci-fi direction, as opposed to [basing it upon] the actual scientific papers.” 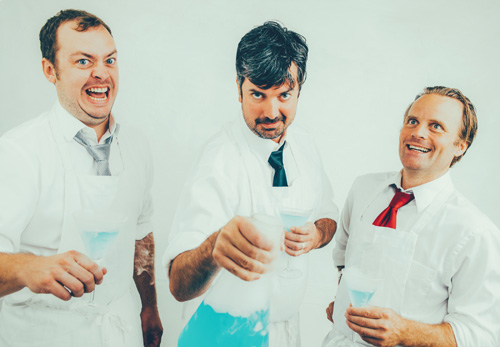 Photo by Sandlin Gaither; check out more of his amazing work at www.sandlingaither.com

When futuristic concepts are addressed in music, synthesizers are usually nearby. And while earlier Analog Moon albums – four released between 2005 and 2010 – featured a conventional guitar/bass/drums/keyboards lineup, for the new record, Britton built the music around synthesizers and drum machines.

Britton says that the synthesizer direction also grew out of necessity. The group had been sharing a drummer with another band. “He was pretty busy,” says Britton, “so we did some shows a little more stripped-down.” They tried an acoustic format, eventually adding a drum machine. “We were arranging some of our older songs that way,” he says, and the new sound influenced the music Britton was writing. “And at the same time, I was reading up a little bit about artificial intelligence.”

The songs on IO aren’t bloodless or foreboding machine-created works. And in fact there’s plenty of guitar on the record. “Sometimes I will get a [song] idea just from playing around, twiddling knobs on synthesizers,” Britton says, “but generally I get the musical foundation of the song on an acoustic guitar. It’s hard to pull that out once that song is written.”

The group has been focusing intently on development and completion of IO. “We laid back from playing a lot of live shows,” Britton says. “We were only doing maybe three or four a year for the last couple of years.” But they have performed the IO material onstage in various forms; those experiences helped tighten up the songs. And because the loud-quiet-loud dynamic that works on a rock, jazz or progressive album doesn’t always translate to a stage, the live versions will differ a bit from what’s on the album. “We’ll notice maybe that [a particular section] doesn’t really shine when we do something in a big loud room full of people,” he says, “so quiet parts have to be finagled to work in a live setting.”

The album sessions featured only founding member Britton (on vocals, synths, guitars, bass, drum machines and samples) and Josh Sullivan on synthesizers, keyboards and vocals. Gearing up for live performance, Analog Moon recently added bassist Matt Gentling (formerly of Archers of Loaf and Superchunk) to round out their sound. But they still don’t use a drummer.

Britton says that while using drum machines has its freeing qualities (“you can schedule practice and shows without having [to work out schedules of] another person,” he laughs), it can be limiting. “Having a bass player makes you miss the drums, too,” he admits, “because they go hand in hand.” But in the end – at least for now – the drum samples make sense. “They bring a kind of retro feel to some of the tracks,” Britton says. “It gives them a certain sort of mechanical feel that works for this concept album.”

While the upcoming album premiere show at the Mothlight will focus on IO, some favorites from Analog Moon’s back catalog will find their way into the set, too, slightly recast to fit the new instrumental format. “Timmy’s Got a Grudge” was originally on the group’s 2007 album AM Radio, and it remains a popular live number. Still, Britton says that “We’re really focusing on the new stuff; I’m not sure we’ll really try to force a square peg into a round hole for everything.”

Britton believes that there’s a place for a concept album like IO in today’s download and playlist culture. “I hope that people can listen to it all the way through,” he says. The group did put what they consider single-sounding cuts on the album, “but we kind of buried them in favor of having the album be cohesive and flowing from A to Z.” He laughs and adds, “If we put all the best songs in the beginning, I feel like people would listen to the first couple songs and then turn it off.”