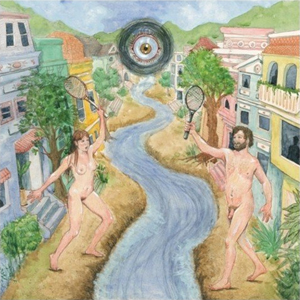 File next to: Moby Grape, The Byrds, Mystery Lights

The name should be your first clue: San Francisco’s Cool Ghouls are unabashed acolytes for rock’s bygone garage-psychedelia era. What sets them apart from similarly retro acts is their well-honed ability to craft earworms: those tunes that stick in the listener’s head like bubblegum on a shoe. Hypnotic and (by pop standard) lengthy guitar solos fit snugly into catchy, chiming rock compositions. Engaging instrumentalists, they also excel at vocal harmonies. They’re not new to the approach, either: Animal Races is their fifth release, following an EP, a cassette, and two full-length albums. Rather than trying to sound like somebody else, Cool Ghouls create original music that expertly conjures the past. In fact – since the past really isn’t what it used to be – with the benefit of a half-century’s perspective on the style, they sometimes improve upon the approach of 1960s jangle-rockers.