On the group’s 2016 debut album Give It Back to You, The Record Company displays its modern-day take on musical forebears like Jimmy Reed, Muddy Waters and Howlin’ Wolf. But guitarist-vocalist Chris Vos isn’t comfortable with being labeled a blues band. “Take the Rolling Stones and Yardbirds; they were influenced by blues. But they’re rock ‘n’ roll music. We’re definitely influenced by blues, early rock ‘n’ roll, punk, rockabilly … all that stuff. If I have to call it something, I call it rock ‘n’ roll.”

Reinforcing that assertion, Vos raves about the decidedly un-bluesy punk pioneers the Stooges. “I just love the authentic chaos that they created; they just let it rip. They weren’t afraid to be who they were.” He describes what he sees as part of the punk ethos: “Keep things moving, keep things happening. Keep the energy up, and have fun. All those things you see in early punk bands; that’s where we get the influence from the Cramps, the Ramones, the Stooges and the Clash. We love bands like those as much as we love Muddy and Wolf.” 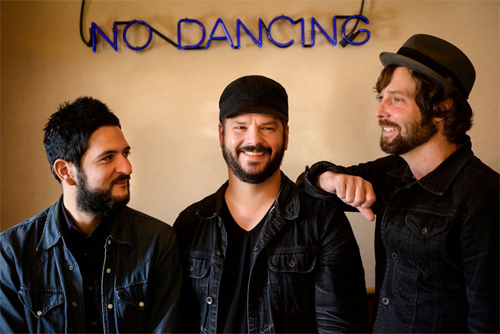 The Record Company (Vos plus bassist Alex Stiff and drummer Marc Cazorla) paid their dues in the fertile music scene of eastern Los Angeles. Vos has nothing but good things to say about that scene. Unlike nearby Hollywood – home of the pay-to-play scheme in which bands pay the club a fee, and then hope they’ll make it back on cover charges – the Echo Park and Silver Lake scene features “a really nice community of artists,” Vos says. “We never had any of that pay-to-play stuff.”

“Sometimes we’d play for free,” he says, but even that worked out well for the band. “We’d have a Monday night residency at The Satellite [in Silver Lake], with no cover charge. People might think, ‘Monday night? Oh my god: that must be terrible!’ But in L.A., it’s not. It’s a great night to play for locals. Because a lot of people in L.A. are in the entertainment business, and on Monday night, a lot of people are out.”

Vos explains that free gigs at The Satellite and other area clubs – ”The Echo, and Harvard & Stone, which was one of the first places that let us play” – helped build The Record Company a fan base and fostered a sense of community. “The scene out there is really healthy and positive,” he says.

Even when The Record Company broke out and started touring, they learned important lessons from the experience. They logged a lot of road miles as the opening act for more established acts including B.B. King, Blackberry Smoke and Social Distortion. “When you’re an opener, you just have to go in with the attitude of realizing you’re the opener,” Vos says, “and you give the people the best show that you have to give. You cannot control what people like and don’t like; if you start worrying about that, you rob the people of whatever you are.”

Vos appreciates the time his band spent opening for others. “It’s a great thing to be an opener for a long time; you learn to understand how your music works with people who have fresh ears,” he says. “We still feel like we’ve got everything to prove and nothing to lose.” He sums up his philosophy: “Throw down, have a good time, don’t be uptight, and just try to be entertaining within the confines of whatever music you’ve created.”

The group values spontaneity, and brought that quality to the recorded-at-home Give It Back To You. “There’s a beautiful energy that happens when you do a take of a tune right after you’ve figured it out,” Vos says. “There’s something very honest in that. We’re just always looking for what fits the vibe. And if it sounds right, that’s what we go with.”