Taking full advantage of their first majority in North Carolina government in decades, the state Republican party has pushed through their conservative legislative agenda. Among the most high-profile – and contentious – of their initiatives has been the passage of House Bill #2, officially known as the Public Facilities Privacy and Security Act, widely known as HB2. Opposition to HB2 has been widespread, and across the state a coalition of musicians has banded together to host a series of “Stand Against HB2” benefit concerts. Asheville’s event took place at the Orange Peel on August 28.

While there are many components to the controversial law, the two provisions within it generating the most controversy are one that strips local governments of the authority to make and enact their own anti-discrimination laws, and another that requires all persons to use only those public restrooms that correspond with their gender as designated at birth.

Even among professional musicians opposed to HB2, there has been a variety of responses. Bruce Springsteen led the way for a boycott of North Carolina. In a statement announcing cancellation of a Greensboro date, he wrote, “To my mind, [HB2 is] an attempt by people who cannot stand the progress our country has made in recognizing the human rights of all of our citizens to overturn that progress … Some things are more important than a rock show[,] and this fight against prejudice and bigotry – which is happening as I write – is one of them.”

Singer-songwriter Brandi Carlile is firmly opposed to HB2, but takes a different approach. Characterizing the law as “ thinly veiled legislation … that permits the discrimination of my LGBTQ brothers and sisters in NC,” she wrote that “to cancel my shows in NC would further oppress my fans who are hurt by this legislation.”

Unlike Springsteen and Carlile, music artists based in North Carolina often depend upon gigs in their home state for their livelihood. Many would like to see HB2 repealed. The first Stand Against HB2 show took place at the Haw River Ballroom near Chapel Hill, and raised “a little over $20,000,” says organizer Mike Allen. “You don’t have to be a musician to help,” he points out. Allen volunteered to steward the concert series, designating funds raised to benefit Equality NC. “I’m not a musician. I’m just a guy. And I want my state back.” 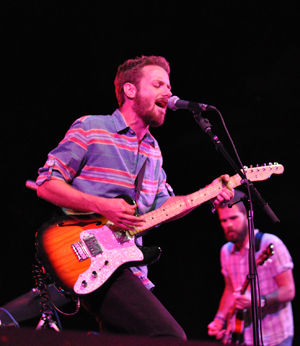 “I was on tour when HB2 was passed and signed into law,” says Brett Harris, a featured performer at the upcoming Asheville concert and veteran of two other Stand Against HB2 shows. “It was a very strange thing to witness that happening in a place I’ve called home for 15-plus years now. This bill – in concert with other pieces of legislation passed in the last 3 or 4 years – makes me feel alienated from [the state].”

Equality NC is the Raleigh-based political arm of the Equality NC Foundation, a nonprofit that raises awareness about issues affecting the state’s LBGTQ community. But the adverse effects of HB2 extend well beyond that community, says Matt Hirschy, the organization’s Director of Advancement. He calls HB2 “a bill that has cost our state hundreds of millions of dollars in lost revenue, whether that be tax revenue, spending or earned revenue from events.” Hirschy describes Equality NC’s mission to “advocate, elect, and educate North Carolinians to a pro-equality mindset. Show proceeds go directly to those efforts as we move into [elections in] November.”

Hirschy appreciates the varying principled stands musicians are taking on the hot-button topic of HB2. “At the end of the day, the artists who come from out of state to either perform here or choose to boycott the state are doing so because they very clearly feel strongly about the issue,” he says. “It’s a very serious decision for folks like Bruce Springsteen to make a call and cancel their show. But I also support artists who want to come here, and play here and invest in groups that are working to make North Carolina a better place.” 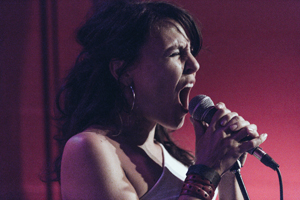 The Stand Against HB2 concert at the Orange Peel was a marathon event – 3 p.m. until midnight – and featured more than fifteen NC performers, including Asheville-based artists Gary Jules, Fireside Collective, and – in her first post-stephaniesĭd show – vocalist Stephanie Morgan.

“I’m not much of a protester,” Morgan admits. “I like to help build momentum for something I like [instead of working] against something that has a lot of momentum moving in the opposite direction.” Being involved in the Stand Against HB2 concerts, she says, allows her to “be part of the build.”

Brett Harris notes that North Carolina is home to “a really resilient community of artists and creatives, people who know how to make things happen. We’ve seen it time and again with Moral Monday protests and the North Carolina Music Love Army: we don’t go away quietly.

“As a person of faith, I’m deeply offended by what I see going on,” Harris says. He considers HB2 “completely antithetical to the gospel that I read and try to live by.” In the face of what he characterizes as a “breeding ground for hate,” he believes “the only thing we can do is to speak love.”