“In music of the 1700s, 1800s and the early part of the 20th century, the violinist or fiddler carried the weight of the group,” says virtuoso violinist/fiddler Mark O’Connor. “Everybody else kept playing and just went with it. But as musical literature for bands became more sophisticated, the violin somehow lost some ground. So with our teaching, we double down on the role of accompaniment being significant.” O’Connor and his wife Maggie – an acclaimed, conservatory-trained violinist herself – have scheduled workshop-and-concert dates around the USA, including a June 18 date in Asheville NC.

Mark O’Connor has already had a long and illustrious career. His early teachers – “mentors, really,” he says – were bluegrass fiddler Benny Thomasson and legendary French jazz violinist Stéphane Grappelli. O’Connor toured and recorded with both, playing Carnegie Hall at age 17. 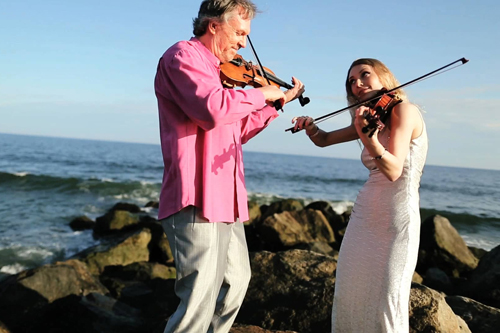 O’Connor would go on to success in nearly every musical genre: he’s won two Grammy Awards, been named six times as the Country Music Association’s Musician of the Year, recorded and toured as a member of Atlanta-based jazz/rock group Dixie Dregs, and sparred with Charlie Daniels on “The Devil Comes Back to Georgia,” a 1993 sequel to Daniels’ 1979 smash hit single. O’Connor has released more than 40 albums, and was recently the featured American performer at a concert staged at the Berlin Konzerthaus. But these days his primary focus is on education in the form of violin duos.

I’ve been doing workshops for decades,” O’Connor says. “More recently, I’ve stepped up my educational output with the O’Connor Method.” That method employs what its creator describes as a balanced pedagogy. The O’Connor Method “connects creativity and technique for students much earlier in the methodology than traditional methods,” he says. “It creates an opportunity for a 21st century musician and string player to have a full range of abilities, from playing by ear to reading music, from understanding chord changes to being able to play in the orchestra.” Calling his method a more holistic means for learning the violin, O’Connor believes that “the best foot forward is to have an inclusive approach that supports the musician to address anything that’s in front of them.”

The Saturday workshop will be a mix of demonstration and hands-on learning; attendees are encouraged to bring their fiddles. “We incorporate some of our teaching philosophies and music, literature and techniques into the workshops,” O’Connor says, promising that “there’s something for everybody.”

The evening concert will feature a mix of O’Connor’s solo pieces and a selection of duos performed with the former Maggie Dixon, a graduate of the Peabody Institute where she earned her Master of Violin degree. “Maggie had grown up playing bluegrass and fiddle music,” O’Connor says, but her formal training didn’t satisfy her desire to explore those folk forms. So she rang up O’Connor and asked for a lesson. The night after her first instruction, she joined O’Connor onstage at a New York City gala. O’Connor says that they quickly became “inseparable,” marrying in 2014. 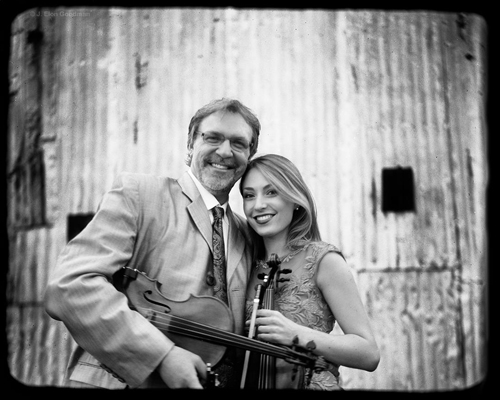 A highlight of their small, private outdoor wedding ceremony was a violin duo featuring the couple; it can be viewed on YouTube. “We didn’t film it on purpose,” O’Connor says. “But when we started playing, everybody’s cell phone went up into the air. We made that video from the different cell phone footage.” Most recently, the couple relocated from New York City to Western North Carolina. The move brought them closer to family, and to the other members of the Nashville-based O’Connor Band with whom they record and tour. “I was looking for a change, especially from the city’s noise floor,” says O’Connor. “I wanted a quieter, more rural living environment. Coming back off the road, my senses were kind of calling for it.”

The O’Connor duos make effective use of the interplay between melodic and rhythmic playing, deftly switching the parts back and forth between the two fiddlers. “Two violins doing a whole concert? I wouldn’t have even have thought of it!” says O’Connor. “We started playing duos at workshops, and people started coming up to us and saying, ‘We’d like to see more of that.’ So we started doing a few bookings like that. It’s a really unique setting.”