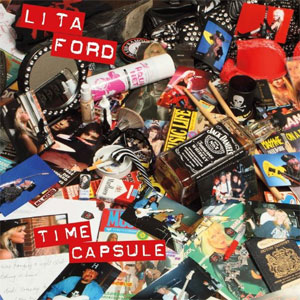 Is there a place for big-guitar power ballads in the 21st century? Former Runaways guitarist Lita Ford certainly thinks so. All of the grandeur and excess of hair metal is on display within the disc’s eleven tunes, compiled from Ford’s archives of previously unreleased material. On the snarling “Where Will I Find My Heart Tonight,” you can all but smell the leather and spandex. Dave Navarro‘s mandolin on “Killing Kind” nods briefly in an Americana direction, but mostly this is earnest power rock that often threatens to take itself a bit too seriously. If you’re hungry for guitar heroics 1980s style, replete with overly dramatic arrangements, you’ve come to the right place. But in general, the fist-pumping, over-the-top emoting songs are best experienced with tongue firmly in cheek. Time Capsule is just that: the essence of an era, boiled down to a compact size for modern-day listeners.