In his influential 1982 book Megatrends, author John Naisbitt observed that “whenever new technology is introduced into society, there must be a counterbalancing human response, or the technology is rejected.” The very human and innovative nature of 21st century synthesizer-based music is a real-world example of Naisbitt’s observations in action. A local group of musicians has focused on the nexus where music and technology intersect, creating the Asheville Electro Music Festival to showcase local and international music. The Festival took place May 6 and 7 in Black Mountain, NC.

“It all grew out of the internet-based electro music community, people who wanted the opportunity to get together and share their musical ideas and expressions,” says event organizer Greg Waltzer. The event started in Philadelphia and eventually moved to New York. After Waltzer and his wife moved to Asheville, they decided to start a similar event in 2012, initially called Mountain Skies. “There’s a great artistic community here, and there are a lot of creative people,” Waltzer says. Plus, Asheville was already a popular vacation destination for many of his musical friends. 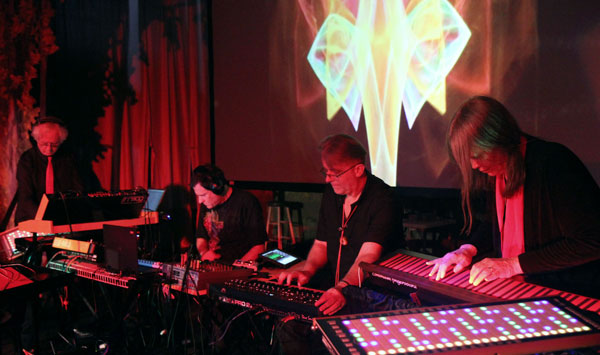 Though it features more than two dozen acts performing over the course of two days, the Asheville Electro Music Festival is distinctly different from other similarly-themed events. Waltzer characterizes the participants as “more interested in their passion for music, and for sharing it, than in music as a business or commercial enterprise.” He says that the focus has always been more on community than “drawing big-name artists who will sell a lot of tickets.”

For participants, it’s partly a networking event, says Waltzer. “It’s a chance to get together and collaborate with other artists who have similar interests.” But he says that it’s also an opportunity for the broader community to “experience music that’s a little bit different than what you see and hear in mainstream music.” He characterizes the music showcased at the festival as “less constrained to the conventional genres.”

The festival lineup does emphasize accessibility. “It’s engaging music that’s innovative at he same time,” Waltzer says. The festival encompasses electro-acoustic and electronic music, which means attendees will see and hear performances that employ synthesizers, home-made circuits, wooden flutes, voice, and any number of “found” objects. Trance, ambient, space and electro-pop are just a sampling of the styles showcased at the festival.

Candy Durant of Charlotte-based Tenderlash (performing Friday afternoon) believes that electronic music has the ability to be emotive and organic “if you let it. Turn that attack knob, add some delay or resonance, and even though the pattern is the same, it sounds completely different. It takes on a whole other personality and mood. That’s a very organic process.”

Performers are primarily drawn from the community that Waltzer has come to know via the electro-music.com website and larger events in New York. About half are local or regional acts. If there’s a common thread among all the performers, Waltzer says it’s “passion for innovative music and expression, for doing something out of the ordinary.” While many acts on the bill have played at previous festivals, Waltzer says that he actively seeks to feature more local acts.

The intimate, up-close nature of the festival also means that there’s much less of a wall between performer and audience: it’s a living example of Naisbitt’s “high tech/high touch” paradigm. Attendees socialize with each other, and with the musicians, Waltzer says. After each performance, concertgoers often “go up on stage and talk to the musicians about their technique and equipment, and how they make their music,” he says. “So it’s really interactive.”

From the start, visuals have been a key component of the festival. Waltzer says that the goal is to “create visuals that will complement the music and enhance the experience.” Each of the two days kicks off with a seminar/performance workshop.