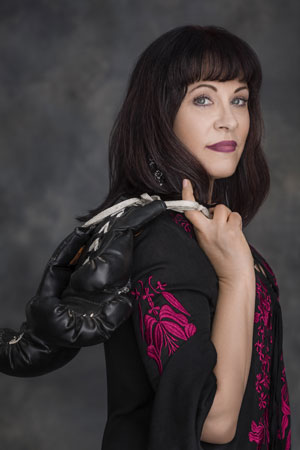 Though award-winning blues vocalist Janiva Magness has recorded a dozen albums to date (her latest, Love Wins Again, was released April 8), she came to songwriting long after her career began. “I did not want to be a writer,” she says. “It made me nervous; I didn’t like the idea. I wanted that idea to go away.”

But what Magness describes as “messages from the universe” didn’t stop whispering in her ear. “I finally had to surrender to that,” she says. On her 2012 album Stronger for It, she co-wrote three songs with producer Dave Darling. The Blues Music Awards recognized one of those tracks, “I Won’t Cry,” as Song of the Year (Magness also won her fourth award for Contemporary Blues Female Artist of the Year).

Magness has faced many challenges in her life; an upcoming memoir will explore those in detail. Opening up about the struggles she’s faced and conquered has provided grist for her songwriting efforts. But it wasn’t easy. “ The fact of the matter is, I’m an extremely private person,” she says. But by sharing her stories, Magness believes that she provides some measure of help to listeners who face challenges of their own. “It provides this thing called connection. It brings about forward motion, and in that there is a healing that occurs.”

Magness’ conversation is peppered with the language of recovery. As a result, she’s in a much happier place than she once was. “My therapist has assured me that I will have challenges pretty much all of my days,” she laughs. “But one of them will never be that my head is too big to fit through the door.”

“I take it to heart that the American roots community decides that they herald what I am doing as an artist,” she says. “But it absolutely puts more pressure on me. It’s very, very real: ‘Okay, that’s great. Now whaddya got?’”

She confesses to reading reviews of her work (“I know it’s illegal,” she jokes, “but I do”), but is careful not to put too much stock into the positive notices. Magness observes that “how we see ourselves and how the world sees us are two different points; what’s accurate is somewhere in the middle.”

Magness’ current tour has already taken her to Australia for a major blues festival, but it’s clear she enjoys playing to smaller audiences as well. “One of the wonderful things about an intimate setting is that it allows an opportunity to play some material that wouldn’t necessarily translate on a larger stage,” she says. “It allows for a different level of intimacy, the exchange between the band and the audience.”

On Love Wins Again, Janiva Magness continues to expand her repertoire. Magness says that the record encompasses the branches of the musical tree. “And I do see them as branches,” she says. “Without blues in its most traditional, tap-rooted form, soul music, r&b, folk, Southern rock…none of that would exist.”

An edited version of this feature appeared in Pittsburgh City Paper.