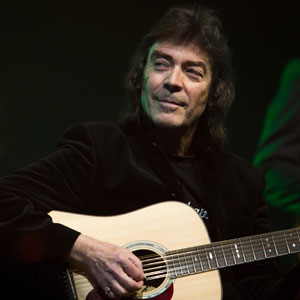 Bill Kopp: Do you think that quality among the three of them – early on – was a key to them staying together long after you and Peter had left the group?

Steve Hackett: I think so, but it’s getting on 20 years now that that power trio did anything creatively in the studio. We are talking about history here, of course. I think it was easier. You’ve got clearly defined roles: one guy does the chording, one guy does rhythm, and the other guy writes. You haven’t got the competition. There’s not another great keyboard player waiting in the wings, or another guitarist who’s trying to be of relevance without just doubling the bass. Or doubling something that the keyboard’s doing. It does show you that band’s don’t need to be any bigger than three.

Although The Beatles would have probably disagreed. But they had all that manpower, from any orchestra you’d care to name anywhere in the world; everyone wanted to work with The Beatles.

Genesis was rather different; it was another school, where it got smaller and smaller and smaller. And eventually, I guess, phase cancellation leads to nothing. So there you are. I think there’s a danger in trying to do it all in-house. Because obviously we know that from [Mike Oldfield‘s] Tubular Bells onward, no keyboard player really needs anybody to work on their albums.

But collaborative work is nice; it’s great to work with someone who’s a great singer. Many of my great memories are of working with powerhouse singers. Such as – not just the Genesis guys – but Richie Havens, who was extraordinary. And Steve Walsh from Kansas, and Randy Crawford, who sang “Street Life” with The Crusaders … all on the same album. I like to work with other people, believe me. I don’t like to be doing all of it myself; not every album, anyway.

BK: In The Man, The Music, you set up in the control room and play your “Firth of Fifth” solo along with a backing track. You say it’s your favorite, and it’s my favorite Genesis moment on my favorite song of the group’s. There’s something deeply emotionally resonant about the solo, but I’ve never been able to figure out exactly what it is. Do you have any thoughts on what makes it so special, so beloved by fans?

SH: It might be contentious, but I would say the influences on that solo range form the simplicity of Erik Satie through to some of the kinds of shapes and patterns that Bach used. But there’s a kind of visualization that goes with it. Many years ago – a year before I joined Genesis – I worked with a band called Quiet World. Three brothers had lived in South Africa; they came to these shores – they were signed to Pye Records at the time – and their father was a medium, a psychic. He used to receive spirits, and he’d send tapes over, instructing them on how to record, on what they should do. This was extremely exotic for me, this stuff. So we’d sit around this flat in Bayswater, and this guy would be describing the idea of “imagine a sea with a bird flying high above it.” And I had that in mind when the solo starts, with the F# sustained note. The idea that you’ve got that tranquility underneath, this thing that just sits there, riding on the top of it. There’s a high F# before the theme kicks in.

So that’s part of the history. Then of course you’ve got the Mellotron, you’ve got organ, you’ve got the band sounding quite symphonic. The band plays a supporting role as they let me have the longest guitar solo on any Genesis track before or since. It’s arguably the most famous Genesis guitar solo, but I think the reason why it works is because the melody was good in the first place. And that I can’t claim credit for, because it was Tony’s melody. And my interpretation of it, of course.

BK: In their review of your 2011 album Beyond the Shrouded Horizon, Allmusic describes you as being at the peak of your powers. That goes against the conventional wisdom in rock, that it’s a young person’s game. Even though you often focus on playing music from your Genesis days, obviously you still have a lot new to express musically. From where do you draw your inspiration?

SH: I do travel a lot. It’s a byproduct of being in the music industry. And in the past year I’ve traveled to places as far flung as Peru, for instance. Listening to the marvelous music there, I had a charango (a little stringed instrument) and a kind of flute that you play with that very shrill, fast vibrato. And all of that is marvelously evocative.

And in recent times I’ve worked with a guy called Malic Mansurov from Azerbaijan. He’s someone who’s like a cross between Ravi Shankar and John McLaughlin. He’s got this mystical element and this bulletproof technique, lightning fast. It’s very magical.

I get inspired by other people on other instruments. Just today we’ve been working on a rock song. But it’s got a lot of flamenco elements. I’ve come to the conclusion that the Spanish guitarist – the flamenco guitarists, the Gypsies – are the best rhythm guitarists in the world. Perhaps that’s not a revelation to many people, but there, I’ve said it.

And I’ve been trying to work in that genre, taking in what I saw when I was in Seville. I was very, very taken with all of that: watching the Gypsies dance and play. I was talking to one of the guitarists; he was showing me one particular technique that had baffled me for a long, long time. And because I’m not an expert in that area, it fascinates me. If I’m not good at something, I need to learn how to do that. How do these guys do that? How do they make as much noise as they do with one guitar? How do they play as if it’s the last, desperate gasp of any human being? It’s an extraordinary level of energy, and I think that rock can afford to take some of that on board.

I heard some of this when I was in Spain, as a matter of fact. I heard things on the radio, things that might sound straight, but then you hear this flamenco salvo going across. And you think, “Wow. That actually works really well.” So I’m trying to get some of that into my playing.

BK: With Genesis Revisited, you’re bringing classic-era Genesis music to fans around the world. I’ve seen a French Canadian band called The Musical Box; they work with the same material. Are you familiar with them?

SH: Yes, I am. I jammed with them when they played in London, and once in Switzerland. I try and encourage as many tribute bands as possible. Because I think keeping that music alive is important. There are a lot of Genesis tribute bands around.

When I do it with my band, we try to not slavishly repeat everything. We try to be authentic; it’s not a “Jazz Odyssey” version. And it’s not a classical collection of suites loosely based on the works of Genesis. It is the real thing. But I might play a different guitar solo on the end of “Supper’s Ready” if I feel the need to do that, to take it to the next level, to the mountains. We do what the band might have done if they had a virtuoso soprano sax player, Rob Townsend. So some of the flute or keyboard lines are given over to that. Or twinned, so that we have lightning fast keyboard with lightning fast sax doubling it.

We divide it up in different ways; it’s hard to get three 12-string players in a band, but Genesis had that at the time. So sometimes we subdivide that: we might have one person on the 12-string – probably me – and the keyboard player might be doubling that with a 12-string sample. But he’s adding something to it. And a Variax [MIDI guitar], doing a sort of modeled version of that. When everyone’s chiming away together, it’s a magnificent noise.