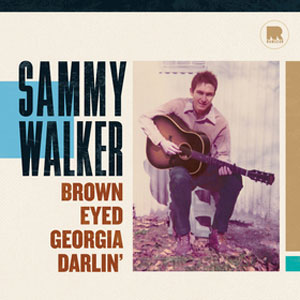 The pop music world has long been on a quest for the Next Fill-in-the-blank. After The Beatles stormed American shores, the rush was on to sign every band with a British accent. When The Knack hit it big with “My Sharona,” record company execs appeared – contract in hand – to sign any group with hooks and skinny ties. On one level, that’s a cynical approach, but business is business: if the public is receptive to a particular sound – no matter how left-field it might seem – then it makes good business sense to give the people (more of) what they want.

That mindset would go far to explain the huge success of Sammy Walker. A folk troubadour who sharply enunciated the vocals of his story-songs, Walker sounded more than a little like a certain Robert Zimmerman.

But here’s the thing: Walker didn’t make the big time. His gentle guitar picking, keening yet melodic harmonica and heartfelt, evocative lyrics sounded like Bob Dylan circa 1964’s The Times They Are a-Changin’. Walker’s music has an even warmer, friendlier vibe, though there’s an undercurrent of sadness, regret, resignation buried in his lyrics.

Though the music has everything to do with early 1960s folk and virtually nothing to do with the following decade’s music, in 1974 Walker nonetheless cut an album called Brown Eyed Georgia Darlin’. For a variety of reasons — typical record company bottom-line stuff — Darlin’ remained in the can, unreleased. Until now, that is: just last Friday (April 8, 2016) Ramseur Records released Sammy Walker’s Brown Eyed Georgia Darlin’. And I’m here to tell you that it was worth the wait. (For us, anyway. For Walker, maybe not so much.)

Walker writes about what he knows. As Walker explains in the record’s one-sheet, most of the ten tunes were written in his then-hometown of Norcross, Georgia (fun if irrelevant fact: at the time, I lived all of ten miles from Walker). And his subject matter focuses on his own life experiences: a brief affair with a girl from Montréal provides the story for “The Streets Above Lake Erie.” The influence of Woody Guthrie shows up clearly in “The East Colorado Dam.” And the inscrutable kid from Hibbing’s fingerprints are all over “Talkin Women’s Lib.”

The album languished unreleased for decades, only now rescued from obscurity by Dolph Ramseur, manager of the Avett Brothers. After the non-release of Darlin’, Walker went on to make some other records, but found his style of music in even less demand as new wave and disco rose in the charts. These days he lives, disabled, in a small town in far Western North Carolina.

Yes, Walker sounds a lot like Bob Dylan. I repeat: a lot. But that shouldn’t be held against him, as he comes by the mannerisms honestly. Yet somehow, folk in Sammy Walker’s hands – simple, unadorned folk – has a more tuneful feel to it than was Dylan’s own in the early 60s.Put another way, if you appreciate early Dylan but wish it was a bit more…tuneful, then Sammy Walker’s long-lost album Brown Eyed Georgia Darlin’ just might become your new favorite thing.