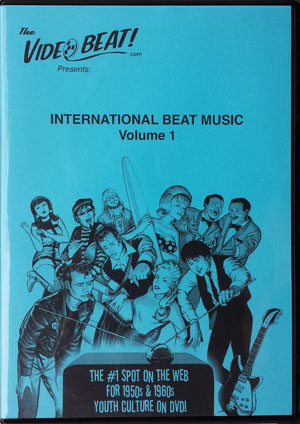 It’s long been established that The Beatles and The Rolling Stones had an incalculable influence upon pop culture of the 1960s and beyond. What’s perhaps less well-known – at least among Anglophone listeners – -is the extent to which those groups made an impression on the music scenes in (nominally) non-English-speaking countries.

The DVD International Beat Music Volume 1, from The Video Beat – provides solid evidence for this. The packaging lists three programs, but in reality there’s much more. First up is a program from mid 1960s Argentine television called Escala Musical TV. The stars of the program are Los Mockers, a superb Uruguayan(!) group very much in an early Beatles/Stones mold. Watch and you’ll see them tear through an ace set of cover tunes (including a fiery take on the Stones’ “Paint it Black”) and derivative-yet-groovy originals. The performances feature more live (read: not mimed) singing and playing than one might expect.

Another band that made it big in Latin America was Los Shakers. A second episode of Escala Musical TV captures them in all their glory. The performance pieces here are the primary focus, but the DVD also includes what’s billed as an “avant-garde film” featuring the band. Clearly the goal with that film was to evoke the spirit of The Beatles’ A Hard Days Night motion picture, but it feels closer in spirit to director Richard Lester‘s earlier film The Running Jumping & Standing Still Film (1959), which was itself something of a blueprint for the more impressionistic parts of A Hard Day’s Night.

Without a doubt, the folks at The Video Beat are committed to giving viewers value for their entertainment dollar. Despite the south American focus of this disc, the best thing about it (from a musical standpoint) is saved for last. An unnamed German television program form the mid 1960s features a showcase of acts whose names will resonate with fans of 60s German beat groups: The Lords, The Rattles, the Blue Flames and others. What’s so remarkable about this program – leave it to the Germans – is that (like much of the Argentine material mentioned above) the performances are all live. The audio quality is quite good; so good, in fact, that you can see and hear just what an amazing bassist the guy in The Lords really is.

The German groups tear through the material with abandon; a version of “Too Much Monkey Business” is so freakin’ fast that one wonders if the Hamburg washerwoman who turned the Beatles on to “prellies” (Preludin, an amphetamine) didn’t share her wares with these rockers as well.

Most of the songs on this DVD are sung in (often thickly accented) English, and all of the between-song commentary is in the shows’ native language (Spanish or German as the case may be). But it’s really about the music, so don’t let the unintelligible dialogue put you off. The exuberance and energy comes shining through. International Beat Music Volume 1 is highly recommended.