Album Review: Robin Trower — Where Are You Going To 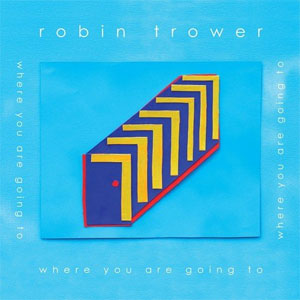 It’s rare for a guitarist to change styles mid-career, but there is some precedent. Jeff Beck played one style when he was with the Yardbirds, and then headed in a sort of blues-jazz hybrid with the Jeff Beck Group and beyond. One could argue that he “found” his true style after trying different ones on for size.

The same is true for Robin Trower. Nothing about his lead guitar playing on those early Procol Harum albums suggested that he’d eventually forge ahead with a style that had more in common with Jimi Hendrix. But that’s exactly what he did, and for his trouble he was rewarded with critical and commercial success through the 1970s. Albums like Bridge of Sighs refined his style. And if he rarely ventured beyond that style, he did what he did very, very well.

Toward the end of a long run with Chrysalis (1973-83), Trower began another successful collaboration with Jack Bruce, another giant of the music world whose playing transcended styles. And Trower has long been a star attraction on the live circuit: to date he’s released no less than ten live albums. He’s currently on tour – repeated requests for an interview unfortunately went unanswered – promoting his latest album, the grammatically-challenged Where Are You Going To.

Far more thought and care went into the music than the title; on this disc, Trower builds upon his blues foundation, but the result isn’t really blues per se. And that’s just fine: Trower’s musical ideas extend beyond the rigid confines of that genre. The most obvious touchstone is, as always, Jimi Hendrix; like Hendrix, Trower understands the uses to which the electric guitar can be put.

And over the years, after ceding vocal duties to other nominally more capable singers, Trower has stepped forward and started singing himself. While he’ll never be mistaken for Jeff Beck Group-era Rod Stewart (though, to be fair, neither would Rod Stewart), he’s quite capable as a lead vocalist. On “Back Where You Belong” he explicitly heads in a swaggering style very similar to Hendrix, but elsewhere he shows an admirable versatility. He even lets out a rock’n’roll scream on the opening of “The Fruits of Your Desire.”

Fans of guitar-based riff rock are sure to enjoy the fretwork on Where Are You Going To, and the slow jams of tunes like “Jigsaw” are tasty indeed. It’s worth noting that Where Are You Going To is as close to a true “solo” album as Trower is likely to make. Chris Taggart supports him ably on the drums, and on all but two of the disc’s ten cuts, Trower handles the bass duties as well. His bass playing isn’t especially remarkable, but it’s meat-n-potatoes solid, which is exactly what the songs demand.

At 71 years of age, most people are looking to settle down, slow down, retire. But Robin Trower is still making music that holds up well when compared to his output forty years ago. Long may he rock.