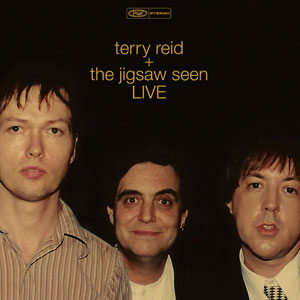 Terry Reid isn’t a household name; instead he’s a kind of almost-famous name in the world of pop music. Those who bought records in the early 1970s probably saw miniature reproductions of the Scotsman’s album covers – his 1968 debut Bang Bang, You’re Terry Reid, for example – advertised on the dust jackets of their LPs. And those who know the history of Led Zeppelin know that he was offered the lead vocal spot in that group; he said no and instead suggested Robert Plant. Nominally still active, Reid was last heard from on record with 2013’s Live in London. A 2016 documentary, Superlungs, provides a through overview of his life and career.

The Jigsaw Seen are a current (read: younger) group with a vaguely power pop sound, but an overall musical approach that indicates they have much more on their collective minds. Their Old Man Reverb got a positive review from me.

This limited-edition single (500 CDs, with a UK-only vinyl release coming later in 2016) brings Reid and The Jigsaw Seen together for two tracks, both cut live way back in 1997 at West Hollywood venue Luna Park. Proceeds for the release go toward The Pete Quaife Foundation; the nonprofit named after The Kinks‘ late bassist raises funds to benefit children on dialysis.

The single’s impassioned cover of Donovan‘s “Young Girl Blues” features Reid delivering a heartfelt vocal reading, with extremely understated instrumental backing that consists of little more than an amplified electric 12-string guitar. Any other instruments present are so subtle as to barely merit notice. And not until the track’s end – when applause is heard – does the listener get the sense that this is a concert recording. The track certainly has that live feel, but the demands of the song are such that the audience keeps silent until its end.

The flip side is two tunes played back-to-back, both Reid originals. “Speak Now or Forever Hold Your Peace” may be more familiar to most listeners by Cheap Trick‘s cover version on their debut album. Reid’s original appeared on his self-titled 1969 album. The Jigsaw Seen get a bit more involved here, but it’s still a predominantly sorta-unplugged version. Speaking of the aforementioned Zep, the tune has a feel quite like the more acoustic-flavored cuts on Led Zeppelin II. The performance slides seamlessly into the more melodramatic and contemplative “May Fly,” a song that also appeared originally on 1969’s Terry Reid, sequenced just before “Speak Now.” It’s a showcase for Reid’s powerful voice. Showing that these performances are off-the-cuff, midway through the tune, Reid implores his Jigsaw Seen accompanists, “One more bridge.”