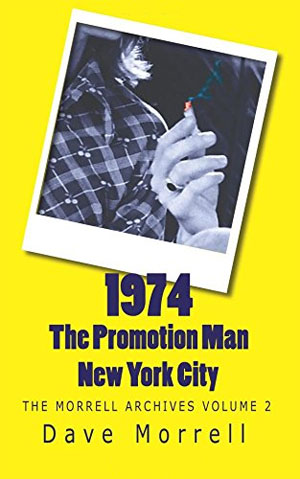 I haven’t seen the current HBO series Vinyl. Among those whom I know who have seen it – those whose aesthetic judgment I place some faith – the consensus is that it’s not all that great; I leave others to decide. But what I do know – and what the existence of such a series confirms – is that there’s an audience for stories about the music business in the 1970s.

Apparently Dave Morrell agrees. His latest book – a slim volume with the unwieldy and clumsy title 1974 The Promotion Man New York City: The Morrell Archives Volume 2 – chronicles his firsthand experience as a young record company promo man in that era.

Morrell’s book (for the sake of clarity and brevity, let’s call The Promotion Man) is a self-published affair, and it shows in the design and overall visual aesthetic. But it’s a well-written if highly episodic account of his early days in the business. Morrell got to spend up-close-and-personal time with Ron Wood, John and Yoko, and other lesser figures in rock history. His stories are warm, well-told, and interesting. At times, he ventures far into the weeds, as in the chapter in which he reproduces notes he took in a 1974 meeting at Warner Brothers Records. The eyes of the casual reader might glaze a bit while reading passages such as those; readers with a deeper interest in the inner workings of music promotion forty years ago will find it more interesting.

There’s one somewhat contentious argument that Morrell puts forth in the pages of The Promotion Man: he insists that the practice of payola – providing tangible remuneration in the form of cash, cocaine, women, etc. in return for airplay – simply didn’t exist in the 1970s, at least not within his orbit. Now, there’s no reason to suspect that Morrell was (much less is) naive, but that assertion runs counter to most every other chronicle or recollection of that era. And of course it doesn’t square with the way things are portrayed on the Martin Scorsese/Mick Jagger program Vinyl, but then of course it wouldn’t. Still, that strong assertion lends a slightly strange tone to the book, and reminds one of the Shakespearean line about protesting too much.

Morrell’s stories about hearing then-unreleased material bu Jimi Hendrix and by The Beatles are the points at which The Promotion Man is at its best, and those chapters along make this quick read, well, worth reading.