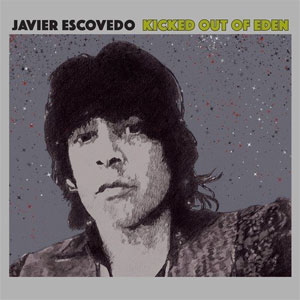 If he wished, Javier Escovedo could make a legitimate claim to music royalty. Brothers Pete and Coke are heroes of Latin jazz, known to rock fans as members of Carlos Santana‘s band. Another brother, Alejandro, made a name for himself with his band Rank and File and with his own superb albums and live shows. And Javier’s niece Sheila E. (Escovedo!) is an acclaimed percussionist whose solo work is impressive (she also played with Prince and as part of Ringo’s All-Starr Band).

Fair enough. But Javier Escovedo is no also-ran, no lesser relation. He’s also among the rocking-est in the bunch. His new album, Kicked Out of Eden, is filled with solid rocking, no-b.s. tunes and performances. Drawing from both punk and Rolling Stones-style r&b-inflected rock, Escovedo arrives at a destination different from The New York Dolls, another act with similar influences.

The song titles “(“Downtown,” “It Ain’t Easy”) don’t rank among the most original in all of rock, but then that misses the point. Escovedo sounds like a better-adjusted Johnny Thunders with his straight-ahead rock approach, one that’s free of artifice. He rocks, and he means it. Though the lineup varies form track to track, there’s a strong and solid core of musicians on the disc’s nine tracks. Hard-hitting squealing lead guitar, a rock-solid, four-on-the-floor rhythm section, and some tasty (if understated) keyboard work are all outstanding characteristics of Kicked Out of Eden.

And when Escovedo quiets tings down, as on “Driving Around,” he displays a nuanced, gentle approach that listeners might not have seen coming. Its inclusion rounds out the feel of this excellent record, and shows that he’s as achingly sincere and heartfelt when singing and playing a near-ballad as when rocking out. “Just Like all the Rest” is full of delightfully Byrdsy, chiming guitars. “This Side of Nowhere” feels a bit like The Replacements. “Bad and Good” shows that Escovedo knows of, understands and appreciates 1960s garage rock. Possibly the best tune on the whole disc, the wistful “Searchin’ for You” is reminiscent of Velvet Crush at their apex. There are no weak tracks on Kicked Out of Eden. Enthusiastically recommended.