The Challenge of the Blues

Vocalist Peggy Ratusz has long been one of Asheville’s leading blues personalities, carrying a torch for the century-old musical form. Her latest musical endeavor (with the help of musical collaborator Aaron Price) involves the upcoming 32nd annual International Blues Challenge, held in Memphis, Tenn. Monday, Jan. 26 to Saturday, Jan. 30. In the run-up to that event, Ratusz and Price scheduled an intimate performance (only 50 tickets were to be sold) at Isis Restaurant & Music Hall Thursday, Jan. 14. The show was designed to promote their efforts and help defray some of the costs of the trip.

“Affiliate blues societies around the world hold regional competitions, and they adhere to many of the rules and guidelines that The Blues Foundation has for the international competition in Memphis,” says Ratusz. Nearly a decade ago, she learned about the International Blues Challenge from then-Asheville-based singer-songwriter Eliza Lynn, who encouraged Ratusz to enter a regional event that was held in Greensboro. The competition was rigorous. “You’ve got three judges and a timekeeper,” Ratusz says. “At the regional level, groups compete against eight to 15 other bands. In the solo and duo categories, there are fewer contestants. But when you get to the international level, there are 80, 90 other bands.” 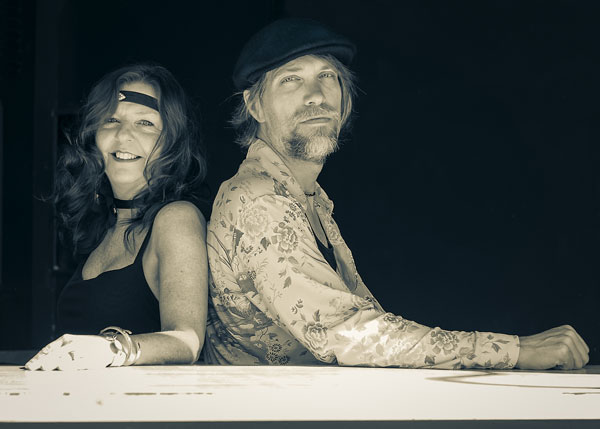 Ratusz didn’t win on that first try, but when she returned with a band the following year, she took first place in Greensboro. “We learned a lot,” she says. In the years that followed, Ratusz worked with guitarist Lee Devico, then of Gas House Mouse, putting together the Asheville-based Southern Fried Blues Society. Three Asheville blues outfits — encouraged by the society — went on to win regional challenges, and Ratusz started attending the annual international competitions in Memphis. “They’re so much fun. My husband and I always go, whether I’m competing or not,” she says.

Ratusz says that she’s never had a band for the competitions: “I’ve always just pulled from Asheville’s stable of awesome players.” But to compete in the regional 2015 Blues Challenge held in Charlotte, she needed a partner, so she teamed up with in-demand local keyboardist Price. They billed themselves as the Bygone Blues Duo.

“They wanted some originals,” Ratusz says. “So I got crack-a-lackin’ on some bygone era-influenced songs.” She collaborated closely with Price, who says, “Peggy’s [style] templates can be an already-existing song, or simply a mood paired with a tempo and a general style. Song arrangement entails coming up with the most impactful intro and ending. Everything in the middle is basically improvised.”

Price characterizes his role as “add[ing] backbone, ribs and a fancy wig to the face with which Peggy presents the music,” and says that he endeavors to “stay out of the way of Peggy’s voice.” The musical pairing works: Ratusz’s vocal and Price’s stride piano (a distinctive style that’s a variant of ragtime) give the duo a distinctive sound, one that won them the top prize at the competition held at Charlotte’s Double Door Inn.

“The Double Door has a rich blues history; I felt like I was back in the Wild West playing in some saloon,” says Price. Winning there meant that the Bygone Blues Duo earned the right to go to Memphis to compete against international acts.

But travel expenses for the week-long event in Tennessee are substantial, so the duo booked the upcoming Isis performance to raise funds and create more buzz about the competition. Last year Ratusz produced a pair of shows at that venue called Women in Blues History. The standing-room-only performances led the audience on a musical and educational journey from 1920 to the present. “It really resonated with people,” she says. The set spotlighted music by “everyone from Lil Johnson to Susan Tedeschi.” That approach informs the presentation of the Bygone Blues Duo set as well.

Local blues stars Al Coffey & Da Grind made it to the semifinals in last year’s International Blues Challenge, and a few other North Carolina acts have reached the level of competing in Memphis. But none has made it to the top three, which is where Ratusz and Price have set their sights.

Ratusz reflects on the state of the local blues scene. “It always feels like it’s doing well when you’re in a roomful of blues lovers,” she says. But she wonders aloud if blues isn’t doing very well locally. She even wrote a recent essay for WNC Woman titled, The Ups and Downs of the Blues. Yet she strikes a hopeful tone, saying, “As long as people come and listen, then it’s not dead.” Coffey, for example, hosts a successful blues jam every week at Tressa’s, and weekly blues jams at Westville Pub and the (now-closed) Emerald Lounge have drawn good crowds. And with Ratusz and Price having a shot at international fame, Western North Carolina-based blues is poised to remain vital and relevant now and into the future.