The Handcuffs: A Tale of the Tape (Part 2)

“For me,” The Handcuffs guitarist/vocalist Chloe F. Orwell adds, “when we’re in the studio for four twelve-hour days, I think to myself, ‘There is nowhere in the world I’d rather be than creating in the studio.’” But then The Handcuffs play a couple of shows in front of enthusiastic audiences, and that perspective quickly changes. “We play in Nashville, Detroit, or even here in Chicago, and I think to myself, ‘There is nowhere on Earth I’d rather be than right here onstage!’ The chemistry between me and my band mates is so strong that I never want to do anything else. So I don’t think I could ever do one without having the other.” 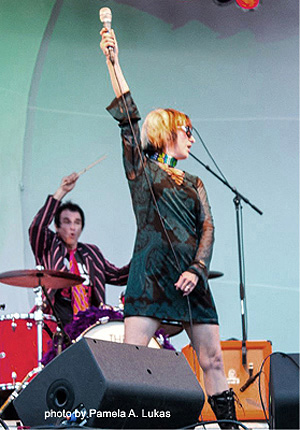 That chemistry comes through on the cassette track “All the Way from Memphis,” a recording that features the current lineup of The Handcuffs, a now all-female (except for drummer Brad Elvis) lineup. The gender makeup of the band wasn’t thought out ahead of time. “It wasn’t planned,” Chloe says. “But it’s worked out incredibly well.” In fact in the early days, The Handcuffs were just Brad and Chloe, and they were a studio-only project. “We did [our first] record, and thought, ‘if something starts happening, maybe we’ll put a band together.’” Things did indeed start happening, and bassist Emily Togni joined the group shortly thereafter.

“Brad and I were always live players, anyway,” Chloe points out. The band went through some additions and personnel changes – all amicable, she hastens to add – before coalescing around the current lineup which includes keyboardist Alison Hinderliter and newest member, lead guitarist Susie Q. Winn. “She just really happened to fit us,” Chloe says. “We didn’t think, ‘Wow, this will be great, because now we’ll be this novelty.’ All we thought about was, ‘This band is great.’” She observes, “Now, we get less ‘Wow, you’re an all-female band with a male drummer’ than we did when we were more mixed. And as a woman in the music business for a really long time, and who’s had a lot of struggles that a lot of women in male-dominated fields have, that’s great. That’s what you want.”

Orwell relates a common occurrence. “We’ll walk into a club where we’re playing with an all-male band. They’ll look at us and kind of go, ‘Oh. Okay. We didn’t realize we were playing with all chicks tonight.’ And then about a third of the way through our set, they’re all at the front of the stage, super into it.”

And even though Brad Elvis is set up behind the other players in the band, he earns attention. Chloe accurately describes him as a “Keith Moon-type drummer,” and says that people tell her, “You’ve got four attractive women in the band, but we can’t stop watching the drummer!”

Though they stay busy with live dates and other individual pursuits (musical and otherwise), The Handcuffs are already at work on a full-length followup to Waiting for the Robot. “We have a bunch of basic tracks done already,” says Chloe. “It’s just a matter of us finding time,” she says. 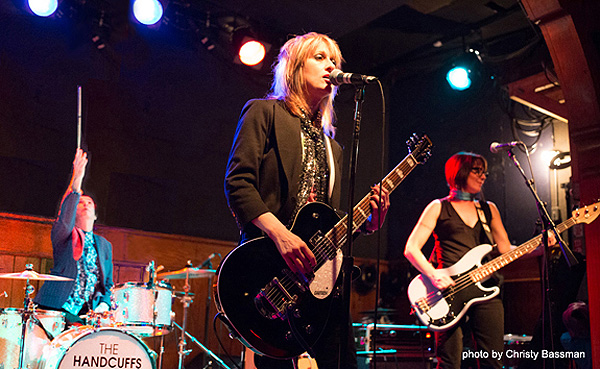 “And also, money. We don’t bother with all that GoFundMe nonsense,” Chloe laughs. “We got ourselves into this, and we’re gonna pay our way out of it. We need to be able to finance our records, but we have to pay our mortgage, too.” (In addition to being musical partners, Orwell and Elvis are a married couple.) These days, The Handcuffs are self-managed. “When we first started, Chloe and I recorded an album [2006’s Model for a Revolution],” Elvis recalls. “And we got a management deal out of it.” Orwell delivers the punch line: “The best thing that happened out of that management deal was that it was an incredibly beneficial learning experience.”

The band has gigs booked well into Summer 2016; a full list of shows can be found on The Handcuffs website. In the meantime, Chloe says, “Potentially, the long, cold winter ahead means we’ll be able to hunker down in the studio and get it finished. I’m really excited, because we haven’t worked much with this current lineup in the studio. I cannot wait to hear what happens when we’re all in the studio together.”

Order The Handcuffs’ All the Way from Chicago here.

The Handcuffs’ next live date:  The Handcuffs, Razorhouse and Les Vikq; Friday, February 5 at Township, Chicago