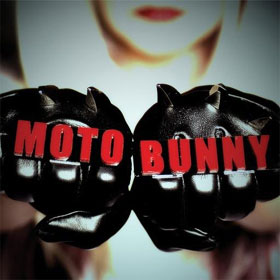 File next to: The Bangles, Amboy Dukes, Joan Jett

It’s quite a tightrope walk to create music that rocks hard – really hard – yet maintains a strong, hooky, singalong kind of vibe. Motobunny manages it; fronted by two women and with a three-man backline, the group combines the sneering energy of Detroit rock (Stooges, MC5) with the bouncy pop of Katrina & the Waves and The Go-Go’s. Crunchy power chords, deep riffs and Bonham-level hits on the drumheads propel singalong melodies with solid vocal harmonies. All five members have extensive pedigrees that help explain the influence of wildly disparate musical styles, but the fact that it all works together so well can only be put down to chemistry. It’s not overstating the case to suggest that Motobunny could reveal themselves to be that rarest of acts: all things to all people (or at least people who appreciate a near-perfect mix of solid rock and melodic pop).