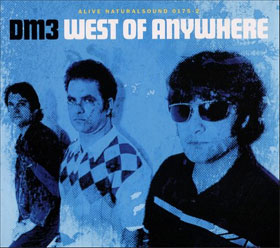 If you were American and into power pop, the 1990s was a decade filled with riches. You could blissfully ignore all that dreadful hair metal and the wooly, flannel-shirted grunge scene, and instead enjoy the high-octane, hook-filled pleasures of music from Jellyfish, Redd Kross, Matthew Sweet, Michael Penn, The Posies…on and on. And though they made little commercial inroads in the USA, Australia’s DM3 caught the attention of American critics. Unashamed to claim the phrase “maximum power pop,” the group managed to place one of their tunes – the delightful “Show You” – onto the last in the celebrated Yellow Pills compilation series. But there’s so much great music in the relatively slim DM3 catalog that this best-of compilation doesn’t (and doesn’t need to) include that tune. Filled with shoulda-beens and never-weres, West of Anywhere is eighteen tracks of melodic, infectious powerpop in the grand tradition.