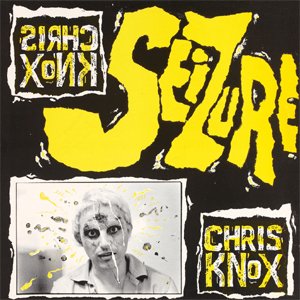 I have a lot for which to thank Richie Unterberger. Reading the renowned music journalist’s 1998 book – the first of several – Unknown Legends of Rock’n’Roll introduced me to countless fascinating musical artists. Before reading that book, I considered myself reasonably aware of important yet little-known figures in rock music. Unterberger’s book helped me realize just how much I had been missing.

One of the chapters in Unknown Legends of Rock’n’Roll focused on New Zealand indie/lo-fi/DIY acts Tall Dwarfs and band member Chris Knox. Based on my experiences exploring the music of other artists profiled in the book, I was confident that I’d dig their music. After a bit of digging – the internet was nowhere near the resource it is today – I laid hands on a Knox CD, Songs of You and Me from 1995, and then a few years later I found 2000’s Beat. And in my bootleg collecting period, I managed to score a couple CDs of live Tall Dwarfs shows dating from 2005.

The music was quirky stuff, displaying Knox’s way with a hook and a melody, filtered through a disarming do-it-quick-and-cheap aesthetic that was a hallmark of the kind of Kiwi pop favored by acts on the venerable Flying Nun label.

Fast forward a decade. In 2015, Flying Nun has reissued Knox’s 1989 album Seizure on vinyl. (They’ve also reissued the Tall Dwarfs’ 1990 album Weeville on 12” disc; I cover that album in a separate review.)

The instrumentation on Seizure is typical for (and consistent with) Knox’s aesthetic: simple, straightforward, solid. A tune like the opening track “The Face of Fashion” arguably doesn’t need anything beyond a distorted electric guitar and Knox’s voice. The quirky, catchy pop of “The Woman Inside of Me” features a less-distorted guitar, bass, a spot of keyboards and some rudimentary percussion, but even with the relatively full arrangement, it’s still a stripped-down affair that keeps the emphasis on the song itself. “Statement of Intent” is insistently punky in an almost industrial way, but this ain’t no Throbbing Gristle; Knox’s pop smarts are closer to the approach of Atlanta’s LMNOP (another obscure act that would be well-served by an Unterberger profile, by the way).

“Filling Me” is built around some very basic cheap drum machine sounds, and Knox’s voice here is a bit reminiscent of early Split Enz member (and fellow New Zealander) Phil Judd. The percussion on “Not Given Lightly” feels like a found-sound sample to which Knox applied an old-fashioned Brill Building-style melody. Perhaps it is. Some well-placed vocal harmony overdubs make this one of Seizure‘s most memorable tunes.

“Break!” moves back into noisy punk territory, with a sped-up, country-and-western, clip-clop rhythm at its core. Knox wails and lays out sheets of distorted power chords. The lo-fi (even by Knox standards) “Uncle Tom’s Cabin” has a spooky, Velvet Underground-around-a-campfire vibe. “Wanna” uses another skittery out-of-the-box rhythm as its basis, but the tune gets catcher as it goes along. The brief “And I Will Cry” returns to an acoustic VU style; it’s reminiscent of “Candy Says.”

Many listeners will have mixed feelings abut singing along with the catchy “Rapist,” but title aside, it’s a catchy number that evokes memories of Syd Barrett. Another short track, “Grand Mal” is among the weirdest and least accessible tracks on Seizure.

“Voyeur” is nearly bereft of instruments, instead featuring multiple vocal overdubs and some handclaps. It’s goofily infectious, though. One wouldn’t want an entire album in that style, but it’s a fun diversion. If one boiled power pop down to its very essence, the result might be “Honesty’s Not Enough,” which could conceivably be a hit in a more accessible arrangement. Hammering beats and more power chords propel the metallic “My Dumb Luck” to its fadeout conclusion. The disc wraps up with its shortest track, the two-chord “Ache,” a cross between the Velvets-style approach and Seizure‘s noisier moments.

It’s unfair to characterize Chris Knox’s albums as interchangeable, but his singular approach to songwriting, playing and recording means that it’s also safe to say that if you like anything he’s done, you’ll dig this. And vice versa.