George Duke (1946-2013) was one of the most fascinating figures in music during the second half of the 20th century. Duke was a jazz-and-classically trained musician proficient on any number of instruments, though he is best known as a keyboard player. He got his start collaborating with French virtuoso violinist Jean-Luc Ponty, and his early musical associations included Julian “Cannonball” Adderley and Frank Zappa, two musical giants quick to realize Duke’s immense talents. (At the time of this writing, Wikipedia’s entry on Duke fails to cite his credits on several Cannonball Adderley albums including The Black Messiah and Big Man, not to mention Nat Adderley‘s admittedly weird Soul Zodiac.) 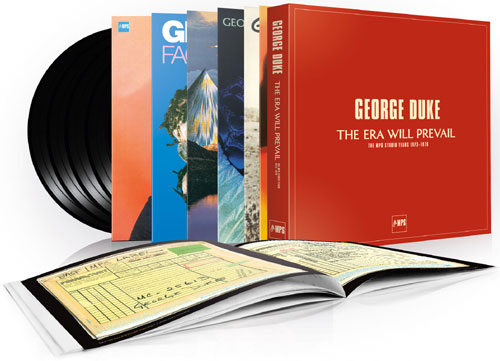 In addition to his fine and groundbreaking work as sideman on those and other albums (somewhat unique in the jazz idiom, he was astoundingly quick to realize and exploit the potential of analog synthesizers), George Duke initiated a solo recording career in 1970. From the very beginning, his musical vision expanded beyond jazz into fusion, experimental, and pop-leaning rhythm and blues/soul. The series of albums he recorded for German label MPS are far less well-known than his later material (the r&b groove of the Clarke/Duke Project, and his production/sideman duties for Miles Davis, Michael Jackson and many others), but not only do they – in retrospect – provide early clues to some of the musical directions he’d take, they’re also exceptionally fine examples of his deft synthesis of styles and genres.

In 2015, MPS has reissued six (or seven, depending on how you count) of Duke’s MPS-era albums as a box set of 180-gram vinyl records. The Era Will Prevail: The MPS Studio Years 1973-1976 contains a myriads of musical gems, and is worth deep exploration for those inclined toward Duke’s combination of expansive adventurism and pop sensibility. 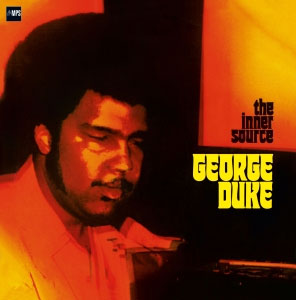 Vol. 1: The Inner Source
This 1973 double LP was originally planned as two separate albums, and it clearly sounds like it. Packaged in a gatefold sleeve, it contained material originally slated as Solus along with a second record that gave the eventual release its title. Recorded in 1971, Solus was actually Duke’s second solo album; the little-heard Save the Country had been released on Pickwick a year before. Tracks from the two sessions are shuffled throughout the 2LP set.

The tracks originally intended for Solus feature Duke primarily on acoustic piano, Fender Rhodes and Wurlitzer electric piano, with (on most tracks) his bandmates John Heard on bass, and drummer Dick Berk. “Au-Right” is funky electric where “Love Reborn” is classy, sophisticated acoustic. The longest piece on the first record, “Peace” is an impressionistic piece on Rhodes; it’s almost proto-New Age; Heard saws subtly at his amplified bass violin. Wah-wah pedals and other rock-leaning devices inform the funky jazz of “The Followers,” but as the track unfolds, it moves more into abstract and ambitious bop territory. “So There You Go” is bright and uptempo acoustic trio jazz, with Duke expressively bringing melody forth from a grand piano. The longest piece on the entire set, “Solus” is also one of the set’s most ambitious. But for all that, it’s still very much in a classic structure, with each man taking his solo turn. “Nigerina Numberuma” finds Duke on his own, bending the synthesizer to his will; the result is an intriguing melange of tribal-sounding melody and futuristic electronic textures. 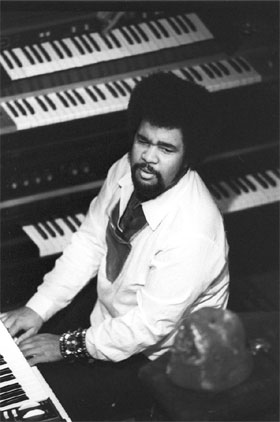 The works recorded for the more ambitious The Inner Source LP vary between Duke solo pieces (the early and freaky synthesizer/ring modulator experiment “Manya”) and a lineup that includes Latin percussion and brass. To wit, and despite its title, “My Soul” isn’t soul jazz nearly as much as a Cuban or Brazilian-flavored dance number. “Feels So Good” is warm, midtempo soul jazz; it’s Duke at his best, combining fluid arrangement, melodic accessibility, and stellar chops. Jerome Richardson‘s flute and Luis Gasca‘s trumpet are especially tasty. “Sweet Bite” features understated accompaniment from Heard and Berk, leaving space for Duke to play warm and mellow left-hand chords while trilling away adventurously with his right hand. “The Inner Source” is Duke and brass man Richardson; overdubbing lets them sound like a much bigger outfit; the dramatic and varied tune has the feel of (very good) TV incidental music of the era. “Life” finds Duke and Heard alternately playing in octave-spaced unison and engaging in a musical dialogue. Starting slowly, by midway the track is racing along at a dizzying speed. Sergio Michanovich‘s “Some Time Ago” is the sole outside composition on this set; subtle bits of synthesizer are slipped in among the trio arrangement. The atmospheric “Twenty-five” features James Leary‘s yawning and expressive bass violin as its primary focus (Leary composed the number). “Always Constant” closes the two-disc set in style, again featuring the Duke/Richardson duo and extensive overdubbing. Still, the track’s feel is so organic that it feels like an all-in live-in-the-studio piece. 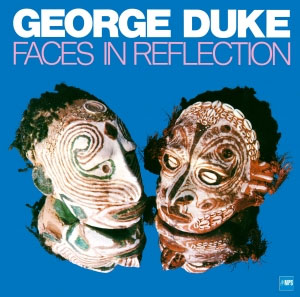 Vol. 2: Faces in Reflection
For this 1974 album – one of three Duke would release that year – the keyboardist brought back bassist John Heard, and started using drummer Ndugu (born Leon Chancler). There’s a closer, more intimate ambience to this album’s production, and the tunes are harder-hitting overall. “The Opening” kicks off the record in thrilling fashion; Ndugu’s propulsive percussion is rooted more in funk and rock than in old school jazz, and Duke’s fiery synthesizer runs are a treat. “Capricorn,” then, comes as quite a surprise. Duke’s wordless vocals and the smooth arrangement call to mind a jazzier Isaac Hayes. “Piano Solo No. 1 + 2” is as advertised: Duke setting aside (for the moment) all electronics, turning in a pair of expressive (and brief) pieces (the latter has some lovely synthesizer work accompanying the piano).

The title of “Psychocomatic Dung” suggests a Zappa influence – Duke was quite busy playing with Frank in this period – and the number is a tour-de-force of a tight funk-jazz trio playing; the juxtaposition of Heard’s acoustic bass and Duke’s electric piano an analog synth is breathtaking. The clavinet break mid-tune is dizzying. The trio leans back for the soulful and otherworldly “Faces in Reflection No. 1,” featuring some delightful synth textures. Brazilian flavor returns for a reading of Milton Nascimento‘s mostly-acoustic “Maria Tres Filhos.” Duke rides the wah-wah pedal on “North Beach,” a solo Rhodes and spacey synth excursion that recalls Sun Ra. “Da Somba” is the most Zappa-like piece on Faces in Reflection, with a stomping intro and speedy flights of keyboard fancy; Ndugu and Heard ably race alongside Duke. The brief “Faces in Reflection No. 2” features a smooth George Duke vocal that displays his vocal prowess taking on a tricky melody, and remaining cool as ice while doing so. The off-kilter vocal line presages Zappa’s own “Outside Now” (with an Ike Willis vocal) from 1979’s Joe’s Garage Act III.