Home  »  comedy • interview   »   “I Don’t Have Any Other Skills!” The Lizz Winstead Interview, Part One

“I Don’t Have Any Other Skills!” The Lizz Winstead Interview, Part One 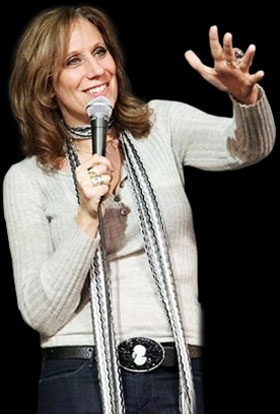 In a change of pace from my generally music-focused interviews, I recently took advantage of the opportunity to interview Lizz Winstead. The satirist has a long and successful history: with Madeleine Smithberg, she created The Daily Show; she was a popular host on (the ultimately ill-fated) Air America radio network (Winstead had discovered her co-host, Rachel Maddow); she was a regular guest on Ed Schultz‘ MSNBC program The Ed Show; and she has maintained a successful career as a standup comic all the while.

As one might guess from that brief (and incomplete) rundown of Winstead’s background, the Minneapolis native not only leans in a progressive political direction, but that perspective informs much of her comedic material. She recently made headlines when she announced her new mobile app Hinder – the name a riff on the dating app Tinder – a utility that provides commentary on men in positions of political power who actively oppose women’s reproductive rights. And her website ladypartsjustice.com provides humorous (yet serious) perspectives on that subject and other topics of political import, targeted by states.

In advance of an Asheville show date, I scheduled a conversation with Winstead; in person and offstage, she’s nearly as funny as her public persona, and every bit as articulate.

Bill Kopp: With Hinder, you’re clearly combining your skills at parody, satire and comedy with what could be called political advocacy. What do you see as the responsibility of a performer/public figure as far as important topics like the right of women to have control over their own bodies?

Lizz Winstead: Hinder was created through my nonprofit, which is unabashedly doing all the things you said; I’m not even pretending I’m not doing that. 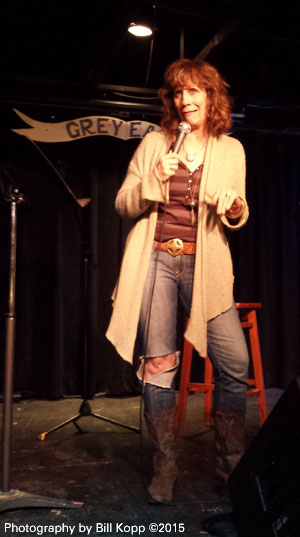 It’s always a tricky question for me when someone asks about responsibility. Because I think different individuals feel different responsibilities toward their level of activism. I happen to feel a very strong responsibility to using my creative talents to be able to, maybe, sway some people to get more active [themselves]. One thing people ask me is, “Are you trying to change people’s minds?” And I usually respond that I’m not necessarily trying to change minds. Because – especially when we’re talking about an issue like this – people are usually dead-set in stone. But what I am trying to do is emphasize to people who are on the fence, or who are maybe just quietly not engaged, that this stuff is going on under our noses. And it’s relentless, and [those doing so] are tireless. And it’s time for people to step up.

Putting it into something like the context of Hinder takes an audience for an existing framework, one that millennials and young people already use. The framework is: Maybe you wanna hook up. Maybe you want to meet somebody. Maybe you’re gonna go have sex with ’em that night. And because [such an app] is popular, applying that approach to people who are trying to judge that behavior, find ways to curb that behavior, or shut down ways that you do that safely, when we put it in the same app context, there’s a real bang for the buck.

BK: I think you’re right. And with no disrespect to people of your and my age, you’re also targeting a population that – to paint with a broad brush – generally has opinions that are a little less fixed, a little less set in stone, than ours might be.

LW: I think that’s right. And I think that, a lot of times, how people prioritize – especially young people – what they’re going to care about is directly related to the added value that it brings them. So if we can bring information and some activism into a space that already feels like a social space to them, maybe we can lure them into, y’know, giving a shit a little bit more.

BK: With the exception of Dennis Miller – who I never thought was very funny to begin with – most every comic I can think of is a progressive, liberal, or at least something besides a conservative. Why, assuming you agree with my premise, do you think that there has never been a good – much less successful – comic who puts forth a right-wing worldview within the context of their material?

LW: That’s an interesting question; we ponder it all the time. And I think one of the answers is that the rigidity, the black-and-white-ness is not what comedy is about. To parse out that you’re a Republican, are you going against what is staunch and black-and-white? And I think a comedian who’s progressive, or at least somebody who looks at the entire system, is willing to pick apart Democrat and Republican.

When you say that most comics are progressive, that’s right, but when you look at their act – the really good people – they’re tearing apart, for example, Democrats who sell out to large corporations. They’re going after Obama for having Ben Bernanke and those guys in positions of power. Right-wing, corporate shitheads. Not having health care reform go far enough, et cetera.

But here’s something interesting to me. I just went to this conference called Politicon. It’s like Comic Con but for politics. It featured every stripe of politics. It had a comedy club competition, and I was one of the judges. And the winner was a conservative comic! He was fascinating to me; I came away thinking, why aren’t conservatives taking on the people who are supposedly representing them? There’s so much to be angry about with that’s been done in the name of conservatism, and this kid – I wish I could remember his name – he really took it on. And I really liked what he did.

So I think that now more than ever, to try to take sides and try to be a political satirist is not really being that good of one. Because if you believe in your philosophy, then you want to be sure that you keep accountable the people who are supposedly representing that philosophy. That’s one of the great jobs of a satirist.

BK: I think, too, that if you’re seen as having a blind spot, your credibility goes away.

LW: That’s exactly right. I know I’ve done something right when I see in my Twitter feed things like, “You’re in bed with Hillary!” “You’re a socialist who [expletive] Bernie!” I think, okay, good. I’m winning. Which one am I? I can’t really be both of them. And I don’t really want to sleep with either of ’em.

BK: I also wonder if, because satire is by its nature at least somewhat transgressive, because it’s “going there,” wherever there might be, if the whole concept isn’t just inconsistent with being conservative.

LW: It seems to me that conservative means protecting the status quo. You like the status quo because it has worked for you. A blind trust in traditional institutions and politicians. I don’t trust any of them, because none of them has done what they have promised.

You know, it’s a problem with anyone who runs for office. You know what viewpoint they’re presenting? It’s “You know what’s wrong with the world? I’m not in charge.” So they’re never the person we want. Wouldn’t it be great if [governing] was like jury duty? We get these dumbshits who are elected; instead we could get people who are struggling, people from different backgrounds. There’s so much supposition about how people live by people who have never met anybody different from them. 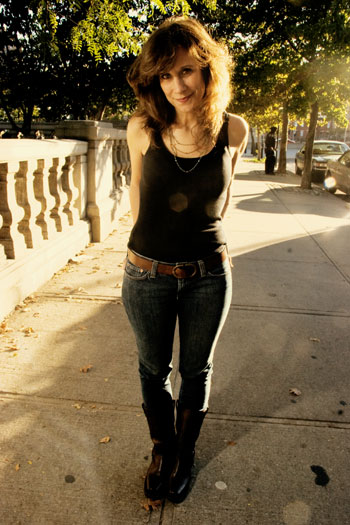 BK: The Daily Show created a new paradigm for treatment of the issues of the day; as successful as it is, and as recognized as it is for changing the way we look at news, I am convinced that the magnitude of its importance remains to be fully recognized. We may have to go ten, twenty years on before we can look back and get a clear perspective on that. When you first came up with the concept, what was your goal?

LW: I was somebody who had been onstage doing some satire, looking at subjects like how women were portrayed in the media. I tried to transition from being an observational comedian into a political comedian. And a big touchstone moment for me – I would almost say it was a calling – was on the first night of the Gulf War, when I was on a blind date. [The pair ended up in a bar with televisions tuned to news coverage of the war.] When that happened – when that guy was sold by the graphics and the theme song – I realized that the media was in cahoots with the information they were given, rather than helping their viewership to be smarter. And I sort of changed then.

So my goal with The Daily Show was to make sure that the media was as accountable as everybody else who we talk about. So it wasn’t just to make fun of politicians; it was to point out that the reason we get these politicians is because the framework from which we get our information is also flawed. And part of the surprise regarding the success of The Daily Show, to me, was that I hadn’t realized just how derelict the media had become in order for a show like that to soar.

I love what you said about how the ripple effect of it will be seen in years to come. And I think one of the things that we should really examine is the that message that the media got about why the show was successful was all wrong. They looked at The Daily Show and said, “Oh! So we should have…funnier graphics!” No! That’s not what people want. They want you to do some actual reporting! Give them investigative journalism. You’re not supposed to be like The Daily Show; you’re supposed to create a space where The Daily Show doesn’t have to exist. It’s flabbergasting.

BK: That’s an interesting point: If the media were really doing their job, you couldn’t put a show like The Daily Show on the air. Because there wouldn’t be anything to talk about.

LW: Yes, that’s right. I was in Sweden a couple of years ago, and people asked me, “Do you think we should have a Daily Show?” And I replied, “I think everybody should be a watchdog for the media. But if your media is not as buffoonish as ours, then you might not need it. It might be why you don’t have one.”