Even in the fertile musical ground of WNC, Asheville isn’t really known as a hotbed of avant-garde musical adventures. But the two-man group Ahleuchatistas are nothing if not sonic explorers. The touring act came home to Asheville for a free-admission show to celebrate their new album release at Mothlight on Friday, November 20.

Variously described as art rock, noise-rock, and experimental, Ahleuchatistas (drummer Ryan Oslance and guitarist Shane Parish) take the drum-and-guitar approach employed by The White Stripes, Local H, Flat Duo Jets and countless others, and head in a decidedly different and more challenging direction. But despite how foreboding terms like “math rock” might look on paper, Oslance and Parish aren’t pretentious musical snobs. “We both play with a lot of different musicians in Asheville,” notes guitarist Parish. “We play with people making roots, jazz, and world music. So we’re really involved in the [local music] community.” He goes on to note that the inspiration for Ahleuchatistas when they formed in 2002 was “progressive and punk rock: a free-for-all, designed to be as creative as we wish.” And he notes that they were surprised at the reaction to their sometimes amelodic approach: “I really didn’t know that people would be as interested as they were.” 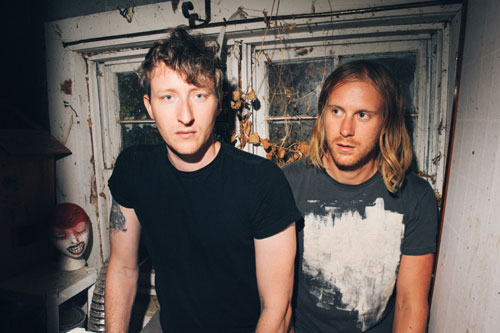 That interest – locally and well beyond WNC – has only increased over the years. The soon-to-be-released Arrebato is the group’s eighth full-length release, and their previous work counts avant-garde legend John Zorn among its fans. The music on Arrebato grew out of Ahleuchatistas’ recent tour of the Iberian peninsula. “Some of the music on Arrebato was composed and modified on our last trip to Spain,” says Oslance. “The song ‘Rincon Pio Sound’ was composed in the car on the way to a show. We learned it at sound check, and performed it that night.” Oslance says that the track expresses the anticipation and joy the duo felt as they approached a gig that would include many friends in the audience.

Ahleuchatistas’ music has the feel of improvisation, though their pieces are tightly constructed, never meandering or “jammy.” That feeling of a bridge between form and improv is intentional, notes Parish. “All of the tunes are composed,” he says, “but there’s freedom to interpret [them] differently each time.” Because they create ambitious instrumental music, Ahleuchatistas’ relationship between guitar and drums is different than in a more standard format, wherein bass and drums serve as rhythm section. “We figured out how to capture a full sound before Ahleuchatistas became a duo,” says Oslance. He and Parish had already begun an improvisationally-based duo as a side project; when the group’s original bassist left the lineup, the group folded that improv sensibility into their music and continued as a two-piece. Some of those improvisations made it onto the first Ahleuchatistas duo record, 2011’s Location Location.

Oslance describes some of the elements that go into Ahleuchatistas’ music: “droning bass frequencies, looping, and me filling in the low end on drums.” He says that a goal of their music is “keeping the energy high.” Parish believes the duo format allows “more rhythmic freedom; when things are a little more open, you can really communicate a lot.” He suggests that the music can be more “fluid and direct” with two people, when the musicians aren’t necessarily “locked into a particular groove. A groove can sometimes box you in rhythmically.”

Ahleuchatistas communicate without the use of words; but are their songs “about” anything? Parish pauses to ponder the question. “Yes,” he allows. “Sometimes a song title will communicate that. It’s often more of a feeling. ‘Shelter in Place’ refers to the general order that was given to the people of Boston during the time of the Marathon bombers; that was a foreboding, spooky thing to tell an entire massive city.” The music aims to convey that sense disquiet and danger.

The music on Arrebato also pays wordless tribute to the DIY groups with which Ahleuchatistas formed bonds while in Spain, Parish says. Those groups share a “collectivist, community mindset, and a sort of radical ethic to create culture.” But he cautions somewhat self-deprecatingly that “it can be somewhat disingenuous to give most of our songs a specific meaning.”

An edited version of this feature appeared originally in Mountain Xpress.