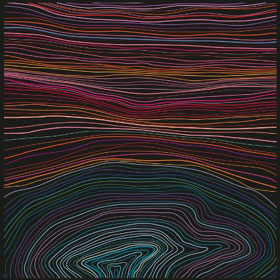 Leader and songwriter Gustav Estjes describes Dungen‘s music as “fokrockpsych.” While that encompasses a wide swath of musical landscape, it barely scratches the surface of Dungen’s musical vision. After a five-year silence that left fans wondering if the Swedish group had folded, Dungen returns with Allas Sak (“everyone’s thing”), their seventh album. The musical motifs on Allas Sak will be familiar to the band’s admirers: a jazz-influenced sound that suggests late-period Hendrix and Traffic, with flute and organ textures deftly woven into the mix. A greater reliance on instrumental passages is a hallmark of this collection. The atonal freakouts that peppered earlier albums are dialed back here (with the possible exception of bits of “Sova”) in favor of an even more melody-focused approach. As with all of the band’s material, the songs here are sung in Swedish, so for Anglophone listeners, the vibe’s the thing.