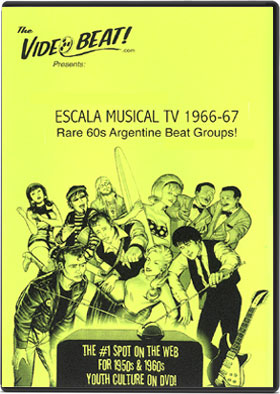 I took three years of Spanish in high school – seemingly a thousand years ago, more like thirty – and to this day I can correctly pronounce the items on a Mexican restaurant menu and/or say things that will get my face slapped (though hopefully not at the same time). That’s about my skill level. So screening a DVD that’s completely in Spanish, I can’t expect to follow the dialogue too well. But that didn’t detract a single bit from the near-rapturous joy I experienced watching Escala Musical TV 1966-67. A collection of mid-sixties Argentine TV programs – sort of their answer to Shindig, but with an important difference – this DVD features two hours’ worth of black-and-white video transfers. The quality isn’t pristine by any standard, but neither is it distractingly inferior. And the sound is better than one might expect for a dub of a live music program from nearly fifty years ago.

That’s right: live. Unlike so many of the lip-sync programs of the era (American Bandstand, Where the Action Is) or even the ones where the lead singer would perform live while the rest of the band mimed to a prerecorded tape (Smothers Brothers), on Escala, the groups actually played and sang. And there was little or no editing; these shows might have even been broadcast live (though they probably were taped ahead of time).

The show’s format will be quite familiar to anyone who’s watched any of the American or British 60s music shows: a studio audience of youngsters, an appealing host, a “teen idol” sort of musical guest, and some bands. The whole thing is fast-paced, high-energy, and low-budget. What’s fascinating about Escala – and what sets it apart from most of its Anglophone counterparts – is the selection of material. While a few of the acts sing and play their original compositions, most of them rely on translated (often rewritten) versions of songs that were released in the USA or UK.

But not just any songs; the numbers chosen tend toward the, well, interesting. I was quite surprised to hear credible covers of tunes originally recorded by The Move and Dave Dee, Dozy, Beaky, Mick and Tich. Even the idol guy (in this case, one Billy Bond) is pretty cool; an Italian singer who relocated to Argentina, he was a popular star there until he left for Brazil amidst Argentina’s political unrest (and military dictatorship) of the 1970s.

In addition to two full episodes of Escala (and a Coca-Cola commercial) the DVD features bonus material in the form of a light comedy TV program that features South American rock legends Los Mockers for most of its run time. The group plays in the background during the dialogue (set at a wedding party) and performs a number of songs in English.

A second bonus feature is a fifteen-minute compilation of various (often unnamed) acts singing and playing. Most of these are of the more common lip-sync variety (some even in color!), but they serve to remind modern-day rock fans that the rock ‘n’ roll phenomenon of the 1960s extended well beyond the English-speaking world, and that other countries and cultures added their own local/native color and character to the music, often to very pleasing effect. Los IN‘s version of Nancy Sinatra‘s “These Boots Are Made for Walking” (in English!) must be seen to be believed. Escala Musical TV 1966-67 is highly recommended to anyone with an interest in 1960s pop music in a global context. [Order Escala Musical TV 1966-67, only available HERE.]