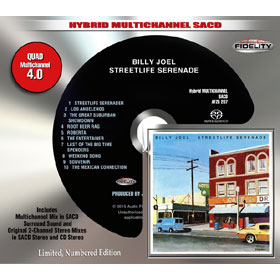 I never bought Billy Joel‘s rock persona. I simply can’t stand the bulk of his Glass Houses era work; it feels forced and insincere to me. His earlier stints in The Hassles and Atilla notwithstanding, Joel has never been a rocker. He’s a troubadour, a singer/songwriter, a piano man, if you will.

And a damn fine one at that: the albums he released in the 1970s are exemplars of the genre, and deserve mention alongside the best work of Carole King, James Taylor and other legendary (if decidedly non-rock) artists. And his 1974 Streetlife Serenade is one of the best among several superb discs. 1971’s Cold Spring Harbor was a solid if middling effort (marred forever by its too-fast mastering that made Joel sound a bit like a singer/songwriter Bee Gee). His second release, Piano Man (1973) has long been viewed as Joel’s breakthrough, but even it’s a bit precious, and his lyrical concerns are often overwrought and maudlin (see “Ballad of Billy the Kid,” the squirmworthy ode-to-wanking “Captain Jack,” and the title track for evidence). But by Streetlife Serenade, Joel had found a balance between his singer/songwriter instincts and a rock-leaning (but not rock!) ambience that in places suggested how fellow tri-state area boy Bruce Springsteen might have sounded if he sat down at a grand piano.

“Streetlife Serenader” (note the spelling; as such it’s not quite a title track) kicks the album off in troubadour mode, to good effect. “Los Angelinos” is a vignette/story song, the kind of thing Joel has always excelled at, and a good example of the manner in which his vocal timbre changes radically when he sings louder or in higher registers; it’s almost as if he’s a different vocalist altogether. And the use of other keyboards in “Los Angelinos” – Wurlitzer electric piano, Hammond organ – shows the composer’s breadth of skill at arranging and playing.

A fetching Moog synthesizer intro hammers that last point home, giving way quickly to “The Great Suburban Showdown,” a tune that – with its understated but essential pedal steel guitar – would make a perfect companion piece to most anything on Elton John‘s Tumbleweed Connection. The Moog returns for a lovely solo and again as an outro; few artists in the singer/songwriter camp were finding such melodic and subtle uses of Moogs in ’74, and Joel deserves plaudits for doing so, even if it’s an avenue he rarely explored further. 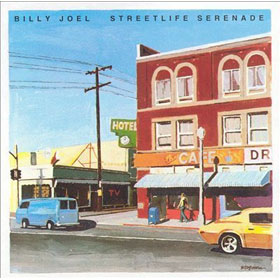 The now-classic “Root Beer Rag” is a showcase for Joel’s barrelhouse/ragtime piano skills; in some ways, Streetlife Serenade is almost a demonstration record of Billy Joel’s mastery of styles and keyboard instruments. And “Root Beer Rag” has dated well, still sounding fresh these some forty-plus years later; unlike Keith Emerson‘s similar excursions (see the synth-and-organ fireworks of ELP‘s reading of Aaron Copland‘s “Hoedown, which, while an undeniable tour-de-force, sounds inescapably of its era).

“Roberta” steers the album back to singer/songwriter mode, and for those who don’t like Joel’s approach, his sincere-guy-at-the-lounge-piano shtick here won’t change their minds. But for those who like his work in the style, it’s as sturdy an entry as any.

“The Entertainer” is one of Joel’s signature compositions. It’s remarkable for its reliance on acoustic guitar and synthesizer to start the piece. His strident vocal approach is at the fore, and the arrangement calls to mind no one else as much as Paul Simon. Taking a (back) page from Bob Dylan, Joel spins out his tale without the use of a chorus, and over seven – count ’em – seven verses. Some lovely and varied piano work remains the song’s highlight, even though it’s not the focus of the arrangement. And once again, Joel’s use of synthesizer is nothing short of remarkable in its understated effectiveness.

When you see it in print, “Last of the Big Time Spenders” sounds almost like a Bernie Taupin title, doesn’t it? Guess what: it sounds like one, too, another in Joel’s Tumbleweed Connection-like compositions for Streetlife Serenade.

“Weekend Song” is a bit over-earnest in its approach, overstuffed as it is with dropped-g adjectives (backbreakin’, boneshakin’, bellyachin’…). The printed lyrics in this new 5.1 Surround reissue make the lyrical tics a bit harder to ignore. A nice electric guitar lead (perhaps by Mike Deasy or any one of the seven other guitarists credited on the disc) enlivens things.

The under-appreciated “Souvenir” would be an end-credits highlight of a live HBO concert film Joel would do a few years hence; here as there, it’s a lovely, spare and brief piano-and-voice piece. The album closes with “The Mexican Connection” an instrumental that features some very subtle percussion work that again recalls Paul Simon; the other highlighted instruments – reverbed electric guitar, bass, drums, synth – all come together nicely to suggest a rock-leaning (but not rock!) answer to Vince Guaraldi.

Now in 2015, Streetlife Serenade has gotten a fresh reissue on hybrid multichannel SACD. For regular CD player listeners, you’ll get a nice transfer of the stereo mix. Those listening on compatible equipment will get to hear a modern version of the album’s 1974 quadrophonic (“For People with Four Ears™”) mix. There are no bonus tracks, new essays, or other goodies appended to this. It’s a straight reissue with the enhanced audio, and that’s enough. Here’s hoping that Audio Fidelity’s SACD series will give the 1976 LP, Turnstiles – for my money Billy Joel’s finest effort – similar treatment.