Cold and Bitter Tears: The Songs of Ted Hawkins 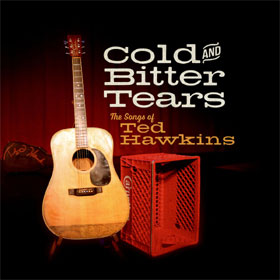 I didn’t know a thing about Ted Hawkins and his music before arriving in Nashville. But among tastemakers, the long-dead folk/Americana (though the term Americana wasn’t in use during his lifetime) troubadour has clearly effected great influence. Though homeless and itinerant, Hawkins became a mainstay of Venice Beach music venues, and seemed on the verge of making it big when he died in 1985 of a stroke at age 58. Long a critical favorite, his often contrary nature arguably got in the way of any more commercial success.

The Thirty Tigers label has put together a tribute to the man, and Cold and Bitter Tears: The Songs of Ted Hawkins showcases some of the most revered and critically-acclaimed Americana artists performing heartfelt readings of his songs. (The album is unrelated to a similarly-titled 2009 Hawkins compilation.) 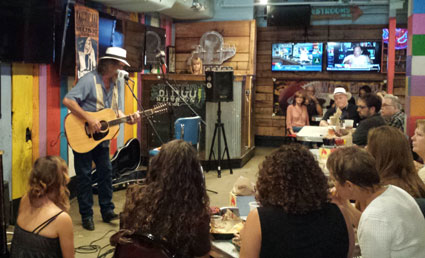 A brief album release party took place at one of Nashville’s watering holes during the AmericanaFest in mid-September; a roomful of record company types, legendary musicians (Jon Tiven, to name but one) and in-the-know music lovers enjoyed intimate, one-off performances by James McMurtry (“Big Things”), Mary Gauthier (“Sorry You’re Sick”), Tim Easton (“One Hundred Miles”) and Randy Midwood (“My Last Goodbye”). Words from each of the artists and Thirty Tigers’ Jenni Finlay made it clear that all of the work that went into the making – and now marketing – of Cold and Bitter Tears is a labor of love for all concerned.

Cold and Bitter Tears: The Songs of Ted Hawkins will be released October 23.