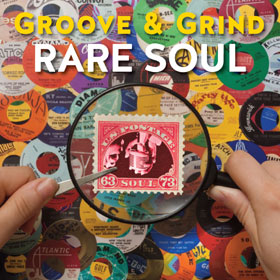 From a critical perspective, there’s not a whole lot to be said or written about Groove & Grind: Rare Soul ’63 – ’73. One either gets it, or doesn’t. Suffice to say that if you would enjoy hearing the contents of a jukebox in a 1960s African American juke joint, or if you dig the sides collected in the various sprawling Stax box sets, then you’ll luxuriate in the hundred-plus songs on this four-disc set. And you won’t have heard most of them before.

The box set’s liner notes offer something of an apology/justification for the dodgy sound quality on some of Groove & Grind‘s cuts; those words – though sincere – are not needed: the sound quality is just fine, and the quality of the music precludes any need for excuses. The rarity of some of these cuts more than justifies their inclusion here, and would do so even if they didn’t make great listening. Music historian and liner notes author Bill Dahl (author of Motown: the Golden Years) admits that he did his research on these often-unknown acts the old (or perhaps new) fashioned way: “between the internet, books and record” labels/sleeves, “you kinda piece it together as best you can.” Occasionally, he admits, “You can’t find anything about an act at all, and that’s distressing.” But he notes that a good bit of information – even if it’s merely context – can be gleaned from looking at the labels on the 45s. Dahl has a few – not many – of Groove & Grind‘s sides in his own record collection, but for others, he relied on photos of labels and other information he managed to unearth. He is careful to note that although “there’s a lot of information on the internet, sometimes it’s wrong. So you’ve got to be careful.”

And careful he was. Across 120-plus pages of the hardbound-book format of Groove & Grind, Dahl provides just the right amount of background on these soul tunes. Because as Dahl and I agreed during our conversation, the kind of person who’d pick up this 4CD set is the sort of character who will delight in the fruits of his careful research. Dahl’s writing is an essential companion to the music itself. (Those who crave the deep kind of background that this sort of a project requires will enjoy following some of the online links Dahl cites in his source notes; those links will provide hours of rewarding reading for the music anoraks among us.) 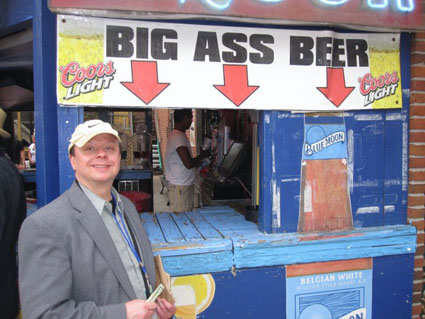 Liner notes author Bill Dahl
A handful of the artists spotlighted on Groove & Grind remain active today: Bettye LaVette, Bobby Rush and Eddie Floyd, for example. But even in their cases – and in the case of Ike and Tina Turner (“You Can’t Miss Nothing That You Never Had,” a 1963 side on the small Sonja label) – Groove & Grind focuses on material that only the hardest of hardcore fans would have known about, much less heard. Dahl and box set producer James Austin sought to find a balance. “I was trying to find a few records by people whom [listeners] would have heard of real well,” says Dahl. “If we just had 112 acts you’ve never heard of, people wouldn’t buy it! So we included a few names that would grab people, hoping that they’d hear the other stuff, and love it too.”

One of the things that Dahl’s liner notes convey is the manner in which pop music history is woven together: the way that, say, George Goldner of Red Bird Records had a hand in these tracks. It’s almost as if, had these tunes become hits – and many of them sound as if they well could have – then the artists involved might have gone on to do more noteworthy and commercially successful work. Dahl mentions Sir Mack Rice – “people know him as a songwriter; he did the original ‘Mustang Sally,’” as an artist who didn’t quite reach the commercial potential his music deserved. His “Gotta Have My Baby’s Love” is one of Dahl’s favorite tracks on this set. Ironing Board Sam is another: “He deserved a better shake than he got,” says Dahl. “He had a keyboard on an ironing board, for God’s sake! That alone should’ve got him something.” Sam’s “Original Funky Bell Bottoms” is included on the set’s fourth disc, subtitled Funky Soul.

A few of the tunes on Groove & Grind will be familiar, but not in the versions found here. “I really like Lezli Valentine‘s ‘Love on a Two Way Street,’” says Dahl of the 1969 single. “It’s the original version, incidentally. I like a lot better than The Moments‘ version.”

Dahl remembers another act worth of special praise. “Another Chicago act, The Mandells. A really good group; they had about five or six singles. They were pretty darn popular on the west side here in Chicago, but they never really made it out of here. They deserved a higher profile. Good production quality, too. You listen to all of their stuff back to back, and you think, ‘How did this group not make it?’”

Part of the answer to Dahl’s rhetorical question is the challenge of distribution. “There were so many tiny labels out there doing quality work,” he observes, “but they didn’t have the pull of a Motown or a Stax. And as a result, a lot of stuff just fell through the cracks.”

It was Dahl’s idea to subdivide the tracks on Groove & Grind into subcategories: urban, group, southern and the aforementioned funky soul. Each of the four discs focuses upon a particular sub-style. “We needed some kind of context,” he admits. “If you just throw 112 songs on four CDs without any kind of context, it’s a little harder to grasp.”

Occasionally a title vetted for inclusion on the set would be left off because the compilers couldn’t locate a clean copy of the recording (much less a master tape). But Dahl hastens to add that there is plenty of worthy material out there – from soul music’s heyday – that still hasn’t been compiled onto a CD collection like Groove & Grind. “It’s amazing how much great soul music was recorded in the 1960s,” he says. “As much as r&b as there was in the 1950s, it seems as if there’s three times as much soul” in the following decade.

Start to finish, Groove & Grind: Rare Soul ’63 – ’73 is a fun listen, and provides superb value-for-money. It’s an illuminating window into little-known music from forty-plus years ago.