Patrick Moraz: MAPping Out the Future, Part One 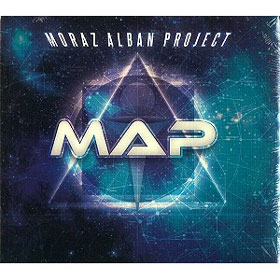 Okay, a few of you might be able to name-check Celtic Frost, Brainticket, or Yello. But for those who aren’t hopeless music nerds, there’s pretty much only one answer: Patrick Moraz. The keyboard virtuoso first came to fame – in the rock idiom, anyway – as a member of Yes from 1974-1976. After a couple of years as a solo artist, Moraz played with The Moody Blues from 1978 to 1990.

But his esteemed career extends well before – and well beyond – those two high-profile rock gigs. Before joining Yes, he was a member of progressive rock trio Refugee, alongside two ex-members of The Nice, Lee Jackson and Brian Davison. And even before all that, the classically-trained pianist had a thriving (if not yet world-renowned) career as a jazz artist. His 1976 solo debut album, The Story of I, is highly regarded as an early example of the synthesis of progressive and “world” music.

He has released more than twenty albums since that debut – including two with acclaimed drummer Bill Bruford – and remains very busy with composing and performing. His latest release is MAP: Moraz Alban Project. A collaborative effort with American drummer Greg Alban, the album exclusively features music, themes and arrangements by Moraz.

The keyboard legend currently lives in Florida. I recently chatted with him about his life, career, new album, and future plans. What follows is an edited transcript.

Bill Kopp: I’ve long been a fan of keyboard-based music that makes use of then-current technology. But one of the traps into which that kind of music can fall is having a “dated” sound. For example, when you hear a Synclavier, it pretty much screams very early 1980s. And the Mellotron, my favorite instrument, is associated with the late 60s and early 70s. How do you approach technology in a way that avoids creating something that will sound “stuck in time” a few years down the line?

Patrick Moraz: The nature of your question is very interesting. As you know, Moraz Alban Project is not a solo album; it was commissioned by my very good friend Greg Alban. And the music I wanted to compose, I didn’t want it to have too many sounds that were completely out of this world. Because the music is fairly simple…well, it depends for whom [laughs]!

How I approach keyboards: of course I’m always into the newest technology, but I always keep a foot not only in the past, but in the legacy of sonic hierarchy, if you will. In terms of acoustic instruments [like] harpsichord, organ, and percussion instruments from Africa and Brazil, in the last few hundred years we’ve had them sounding better and better and better. 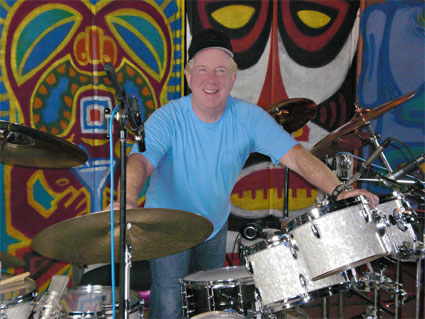 Drummer Greg Alban
Even nowadays in terms of sampling instruments, nothing will replace the real McCoy, so to speak. But they’ve really improved. At the end of the day, music is music. A sound is a sound. But creating it – using those sounds, and here I’m talking about modern technology – are artists like Isao Tomita. Even now, fifty years into this sonic hierarchy, I feel able to produce amazing sounds, whether they are completely analog, analog and digital, or sampled. It’s a world; no, it’s more than a world: it’s a universe!

Creativity is about combining these in within a state of dynamic tension, creating a balance between the extreme forces of sounds from five thousand years ago and modern synthesizers built one or two years ago. To be able to combine these, and also to play live with a drummer, a bassist and so on, really knocking doors down, that’s what it’s about. It’s about people playing at the height of their ability, at the highest level of information transfer. To put it mildly! [laughs]

BK: So Greg Alban asked you to compose music to which he could add drums. Can I take that to mean that you composed, arranged and recorded the music, and then he went in and added his drum parts? Or did the sessions unfold some other way?

PM: No, no. No. Some other way. It was a balance between the two. We played together and jammed and so on. The music was composed, first and foremost. Actually I composed more than [the] nine pieces – at least fourteen pieces – and then I let him choose the ones that felt the most comfortable. And when I say “comfortable,” I’ll tell you what: he took the challenge to play the drums on “Jazz in the Night,” which is such a challenge for a drummer. Because although one can tap your foot to it in 4/4, it’s never really in 4/4. He said [to me], “I’d rather not read the music; I’d rather not even write it down. I’m going to listen to it.” He’s very good. Absolutely fantastic.

Greg and I and [bassist] John Avila, we can now play that music with our eyes closed! We can play it the way it is [written], but we can also jam. And that’s what we will do for the next album. We are really, really determined to put out a bunch of albums together. We had so much fun making this album, and we still have fun listening to it now!

BK: You’ve worked in many idioms – progressive, fusion, jazz, and world music. When you’re composing music, do you approach it from a point of view such as, “Okay, now I’m going to write some music destined for a world music project”? Or do the works sort of tell you, “this is what kind of music we are”?

PM: Not at all. Really, in that respect, psychologically and artistically speaking, having paid my dues, I’m still learning and being influenced.

One day when I was sixteen, I met John Lewis from The Modern Jazz Quartet. He was in Switzerland for a concert and a sort of masterclass. And he told me, “Patrick, I love the way you play, and the way you understand music. You are not [held back] by any boundaries or barriers. Your mind can assimilate and express a lot of different ideas. And I’m urging you to carry this on further, and to listen to the music of the world, and interact with the people [who make it].”

Since then, I was fortunate enough to go to Africa three times, when I was still very young. 1952, 1953 and so on. And after that I went to Japan with a very good friend, and I was chosen as musical director for a ballet with a band that [included] four percussionists and eighteen lady dancers. We toured the whole Far East. That really helped me, not only to assimilate, but to become comfortable in every kind of musical idiom. Well…maybe not every, but quite many! 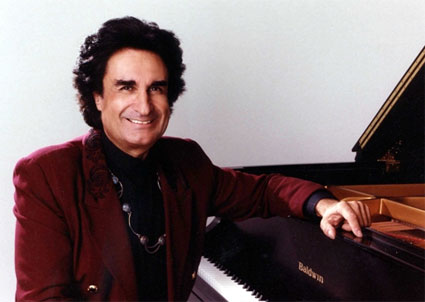 I also met Pierre Boulez when I was very young, and met Karlheinz Stockhausen several times in the studio. And that’s where I got the knack to learn everything I could about synthesis and contemporary music, whether symphonic or on an individual basis.

What I”m saying here is that I’m really comfortable in many idioms: I love Armenian music. I love polyrhythms. I love Buddy Holly. For this album, I wanted to make it palatable. For some people it might sound complex; for others, it may sound extremely easy. “Canyon Afternoon,” for example, I composed in only one take. I played it with the guys, and that’s how it came about. The other pieces – like “The Drums Also Solo” – that’s one I had in mind for a long time. When I used to play with Bill Bruford, we used to have a great piece with a drum solo, composed originally by Max Roach. I admired Roach so much, because at the time he was playing with the top jazzers of his time. I was fortunate enough even to jam once with him…

But anyway, Bill had a piece called “The Drum Also Waltzes.” Having recently seen that extraordinary movie Whiplash, one realizes how intense and difficult [it is] to play drums in any kind of capacity. It’s ironic that near the beginning of the movie, they have the scene with the famous jazz drummer Buddy Rich. He says, “If you can’t play jazz, just join a rock ‘n’ roll band.” I have a very good friend of mine, Jacob Armen – on whose album I played a piece called “Cachaça” [originally on The Story of I] – and his album will be out very soon…I don’t know when. He played a “drum battle” with Buddy Rich when he was eight! So when I saw that Buddy Rich line in the movie, that really made me laugh. Because, I’ll tell you what: at the end of the day, it’s the feel and the beat, and a band is only as good as its drummer. And sometimes it’s very good to have the beat laid down very simply, not with millions of notes. (Though that’s good too.) Parts of this work with Greg show that very simple things can be [expressed] with a beat that is able to be followed by the general population of listeners.

BK: I know you make extensive use of Kurzweil keyboard gear. I have a K2000 myself. The sounds that come with the keyboard are pretty good; when you’re looking for a specific sound, do you use a preset, tweak an existing sound, or start from scratch? Put another way, do you enjoy the technological side of things – the development of sound textures – as much as you do composing and playing?

PM: Absolutely. I don’t use presets; all the sounds that I have, I’ve created myself. If a pianist plays piano, he has his own style and his own sound. When I play synthesizers, I can have much more advanced sounds, but I can also have my own vocabulary of sounds which I have preserved and tweaked. I learn [how to program each synth] from scratch.

PM: That’s like Smithsonian piece! A piece that will never go away. Like a Minimoog. Or a Stradivarius violin.